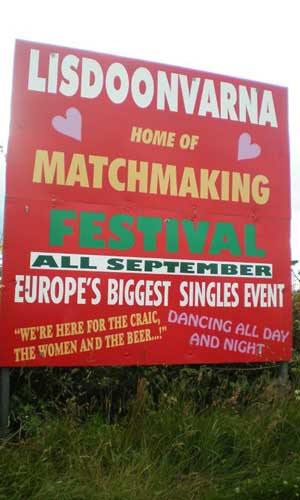 Every week we feature our jewelry. We also take a moment and write about something to do with Ireland. This week, well, the prevalence of online dating has all but wiped away an older form of courtship still existing today—in Ireland.

What’s consistent in the chatter about the Lisdoonvarna Matchmaking Festival is that you need to make your hotel reservations as soon as possible. What that cautionary advice fails to make clear is that this festival, ballooning upwards of 40,000 people over the course of its five-weekends-long duration, takes place in a town with a population of only about 822 residents (according to a 2002 census).

While it’s unclear how exactly such a small town eventually became home to such a large gathering of eligible warm bodies, one can imagine that it has something to do with its mineral springs. 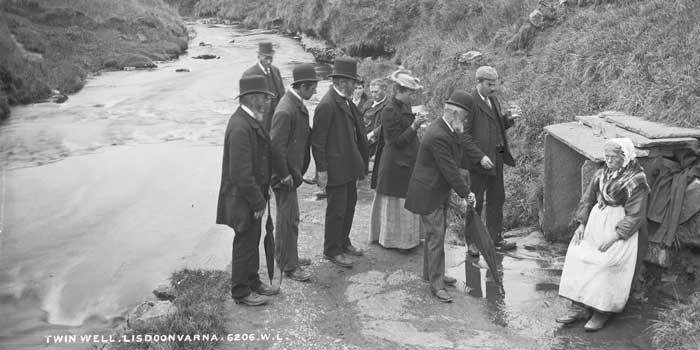 Known as “taking the waters,” people would descend upon Lisdoonvarna. National Geographic lists its “healing sulfur and chalybeate springs.” Lonely Planet goes into even more detail:

“At the southern end of town is a spa well, with a sulphur spring, a Victorian pumphouse and an agreeable, wooded setting. The iron, sulphur, magnesium and iodine in the water are supposed to be good for rheumatic and glandular complaints. Closer to the centre, you can drink the water, even if it’s not exactly a vintage wine-tasting experience. Look for a trail beside the Roadside Tavern that runs 400m down to two wells by the river. One is high in sulphur, the other iron. Mix and match for a cocktail of minerals.” 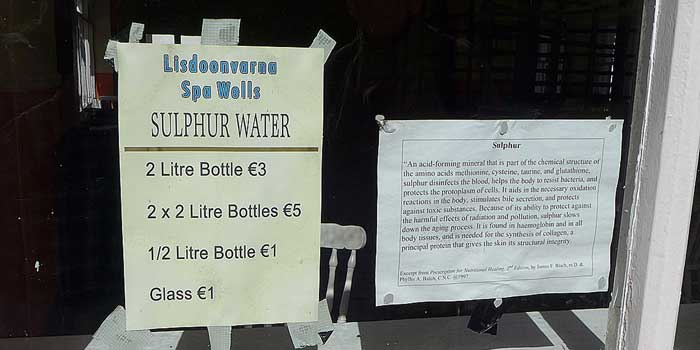 You get a much more complete and exhaustive idea of the significance of the waters of Lisdoonvarna after reading just the abstract of “Selling the colonial spa town: The contested therapeutic landscapes of Lisdoonvarna and Te Aroha”:

“The spa town is one of the foundational sites in the study of therapeutic landscape. As settings in which health informs the production of place and in which place is shaped by reputational associations with healing, spa towns have distinctive health and historical geographies. Drawing on a comparison between two spa towns, Te Aroha in New Zealand and Lisdoonvarna in Ireland, a number of critical therapeutic landscapes themes are explored. Two themes in particular are studied in empirical depth, the first being the commodification of health and place within common spa town narratives from the mid-nineteenth century to the early-to mid-twentieth century. A second core theme concerns itself with the contested identities of the watering-place, in relation to the relative importance of health over social identities and in framing native inhabitations against wider colonial place productions. In the tangled narratives of both towns’ health histories, we argue there is much to be learned about spatial similarities and variations in a process whereby place is commodified and sold on its reputational therapeutic characteristics. This is a process with local socio-cultural variation but with an additional potential for global-local narratives which moves beyond the spa town to wider watering-place forms. Introduction Lisdoonvarna, in CountyClare on the west coast of Ireland and Te Aroha, on the eastern edge of the Hauraki-Waikato plains in New Zealand, are two distant locations that share a series of commonalities. Both feature sets of historic buildings framed by the natural mineral waters around which they were initially constructed. They now exist as contemporary replicas of the Victorian spa town. Both are examples of what health geographers refer to as therapeutic landscapes, places that have achieved lasting reputations for providing physical, mental and spiritual healing (Kearns and Gesler 1998). In their roles as therapeutic landscapes, deeper and contested relationships between health and place can be identified, while both towns can be described as contemporaneously ‘typical and unique’ (Strang 2004). Their relative typicality and uniqueness will form an essential part of our narrative, but also point towards how the colonial spa town was a metaphor for contested under-standings of a traditional therapeutic landscape form (Williams 2007).”

It’s a “therapeutic landscape.” It has “reputational associations.” It all makes sense! And yet, the festival is in Ireland, not New Zealand. And the karst formations that give rise to the Burren and then, the mineral-rich, healing waters of Lisdoonvarna, also exist in France and the Philippines and China and Slovenia and Spain. Where are their matchmaking festivals? 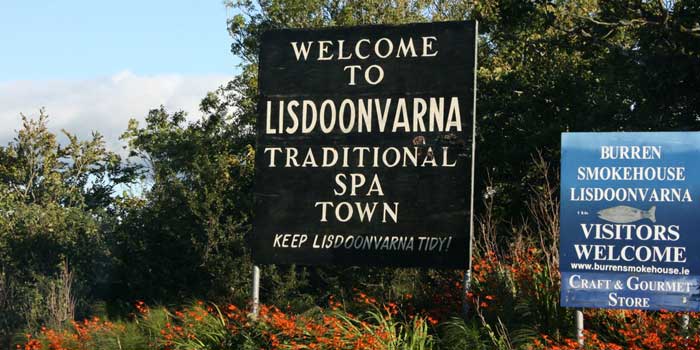 Of course, waters, no matter how healing they are, do not give rise to love. But a population of lonely farmers, too busy for courtship, living nearby a select few who specialize in matchmaking? 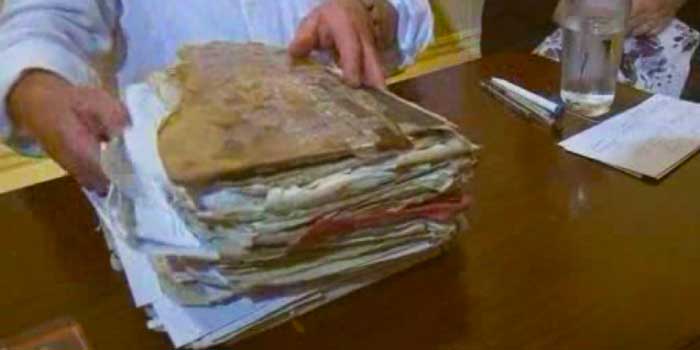 “Anyone that touches the book gets married in five or six months. Sometimes some people even sit on the book.”

The BBC has a delightful video interview with what looks like Lisdoonvarna’s official matchmaker (could there be competition?) Willie Daly and some of his – we presume – clients. In it, Willie offers up gems like, “Women, you know, want to marry for love. Whereas a man, a man is looking for a companion. He’s looking for someone to share his life with.” Could these be the same thing, but only communicated in different ways? It’s something to consider. He also admits that “traditional matchmaking is a very old system, and it’s worked for a very long time, you know.” 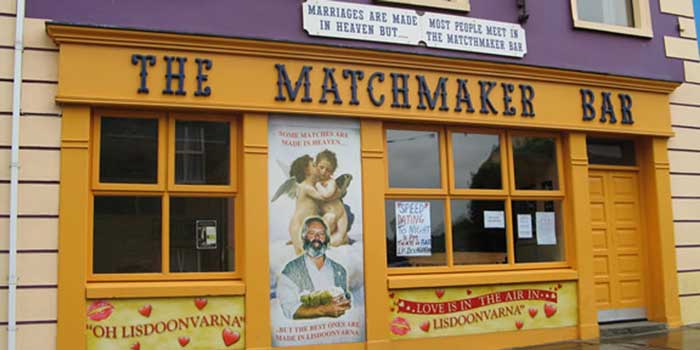 And there’s undeniable truth in what Willie says. Covering the larger festival itself, BBC has another video that opens with a handsome and single farmer parting with some harsh truths:

“Well, it’s lonely. You get up in the morning. You do your milking. You do whatever, come in, you have to make your dinners, your breakfasts and your suppers and repeat actions. It can be very, very lonely.”

There’s plenty of coverage of this world’s largest matchmaking festival. And this year, they’re finally opening it up to same-sex couples with a special opening weekend tribute called “The Outing.” The Irish Times’ Andrew Hamilton interviewed the two men behind the event and shared that their plans are “to grow the Outing into the world’s largest gay and lesbian singles event over the next five years.”

This all begs the question: Just what, exactly, is in the water?

For those of you who are unable to make it, there’s a movie inspired by the festival. Filmed in 1997 and starring Janeane Garofalo, David O’Hara and Denis Leary with the lovely Milo O’Shea as the matchmaker, it’s called, The Matchmaker. For now, it’s all available for your viewing pleasure online.

And if you’d like to hear an interview about the more empirically rigorous side to matchmaking, take a listen to the brains behind Chemistry.com, Rutger’s University anthropology professor and human behavior researcher, Helen Fisher, as she fields questions from The Atlantic’s Scott Stossel: 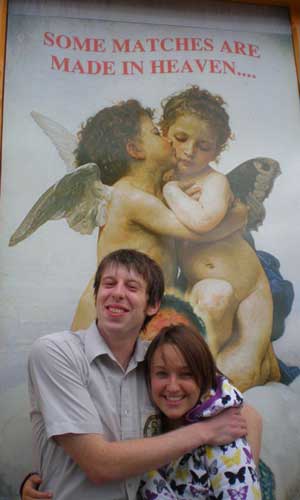