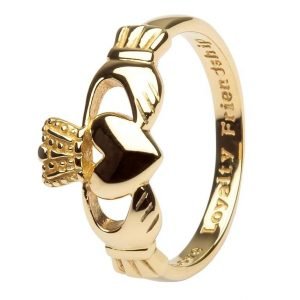 The Claddagh is the most recognized Irish gold ring, but there is an entirely different sort of gold ring those with an eye for detail might notice worn by a proud minority of Irish people.

It says nothing at all about their marital status, and it is not worn on a finger.  An Fáinne is a small ring worn on the lapel or shirt that indicates the person wearing it speaks Irish.  A gold fáinne (an fáinne oir) is for fluent Irish speakers, and a silver one (an fáinne airgid) is for those who are capable of basic Irish but not yet fluent.

An fáinne is the Irish word for ring.  A wedding ring is an fáinne pósta, which is not to be confused with the Irish postal service – An Post.  An fáinne oir literally means a gold ring, but is not used for a gold wedding ring. 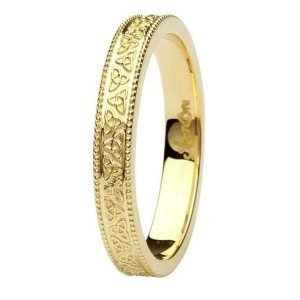 Once upon a time, when the Irish state was young, an fáinne was not easily earned.  The fáinne pre-dates Irish independence was used initially to signal fluency and support use of the Irish language.  It also carried a connotation of nationalism, which was a bit daring at the time.  After centuries of being suppressed to various degrees, all aspects of Irish culture were embraced with much emotion by many when the dust of the fight for independence and civil war settled a bit.  In the 1930s and ‘40s, the gaelscoil (Irish speaking primary schools) were very strict about the students speaking only Irish and fluency was prized.  It was, in some circles, extremely prestigious to have a fáinne or to have one’s child earn a fáinne at school.  And in those days, it was a serious challenge for many families for children to complete school.  The economy was dire.  Life was harsh, and if a child could leave school for a job, many families had little choice but to allow the child to leave school and contribute to the family’s income.  So, a child remaining in school and earning a fáinne was something that gave parents enormous pride.

Today, schools still award an fáinne oir and an fáinne airgid to recognize their students’ achievement and skill in the Irish language.  With very few exceptions, mostly for children learning English as a second language, Irish is a required subject in schools in the Republic of Ireland at the primary and secondary level.  And again with very limited exceptions, school teachers in Ireland are required to demonstrate fluency in the Irish language.  Classes are also available for adults at all levels.  They range from one evening a week to complete immersion programs.

Today, Irish speakers can purchase a fáinne ring online to show they are willing and able to speak Irish, and if you pay attention, you will spot them still on clerical workers, farmers, politicians, teachers and others proud of their Irish language fluency and eager to use the language daily.  Visitors with a bit of Irish should keep a sharp eye out for the little ring that signifies a chance to use it.