This is the day for St. Patrick. Many people pause in celebration, make time to visit more festive activities and almost everyone tries to incorporate something green into their routine. Younger people tend to think of this holiday as a day to party and celebrate, but ironically it is a very religious celebration in spirit. Have you ever wondered how we got uproarious revelry from such a modest start?

If you are in Ireland, you might assume that there will be loud and boisterous celebrations abound. However, this inference is not exactly correct. Yet, this is where St. Patrick’s legend began. This is the area that he is known for. The more festive locales seem to be in other areas of the world like the U.S. The reason these communities celebrate has more to do with Irish heritage and immigration to these parts.

For those who don’t know, Saint Patrick was enslaved in Ireland centuries ago. He was able to eventually escape back home to his family in England. However, he returned to Ireland, the land where he was imprisoned, once he was a cleric, in order to preach to the locals. Most would be too terrified to return to a land that entrapped them, but Patrick did not deter.

He went back to Ireland on the belief that he was being summoned by God to go. Patrick credited God with helping him to survive his slavery when he was just a young boy. He also trusted a call from God for freeing him on the one night he decided to escape. Rather than being embroiled in bitterness, Patrick became a man who showed reverence and gratitude.

He did not like what he knew existed in Ireland and other places which was that people worshiped false gods and were somewhat aimlessly drifting through life without a firm purpose. He felt his mission was to help save people and he did that. He baptized thousands who originally did not know about God or Christianity. That tiny act was eventually responsible for the birth of churches and entire communities built around spirituality.

Perhaps, the drinking and merriment grew from lent and most people wanting a well deserved break from abstinence. However, what this holiday is really about is to honor the life of a man who brought God to many people who were previously lost. And even though his legend lives on today, he was a man who lived in fear long after he was freed.

He knew that there would be people who might want to take him down for his power or his message. It was St. Patrick’s faith which served him throughout his entire life. And although he wrote an inspiring tale in his Confessions which details all of his struggles, the ending contains such a compelling point. In it he wrote,

Daily I expect murder, fraud, or captivity, but I fear none of these things because of the promise of heaven. I have cast myself into the hands of God Almighty who rules everywhere.

It was that promise that enabled him to go on. Countless generations will be forever grateful for that pledge.

For a perfect sentiment and to show just regard for a Saint like Patrick, chose a pendent like this Celtic Trinity Emerald and Diamond Cross. The emerald will showcase the green you need, while the trinity knot will represent exaclty what this man did for so many which was bringing them closer to God and spirit. 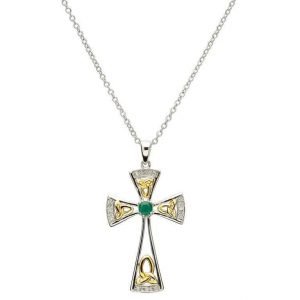