Dublin has a distinctive charm and sense of history.  Three of its most significant buildings and one major bridge were designed by the same architect – James Gandon.

Although he was born and raised in London and was an established architect before moving to Dublin, Ireland’s capital can call him one of our own because of his contributions to the city.  This is the perfect time of year to reflect on how much his vision of Dublin is responsible for the city as we see it now because it is close to his birthday.  We can’t exactly how close because sources differ on the exact day, but he was born in late February in 1742.  Or maybe ’43.  Some sources claim his birthday was February 29th, which would explain the confusion.  But regardless, it is hard to imagine Dublin today with his creations: the Four Courts, the Custom House, the King’s Inns and the O’Connell Bridge. 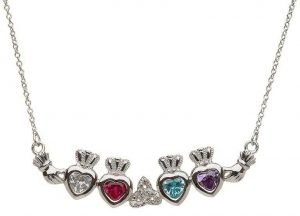 He was an established architect in London when he began applying for Irish projects.  His first effort, a proposal for the Royal Exchange (now City Hall), was in 1769 and was rejected.  But in 1781, he was invited to design the now iconic Custom House in Dublin and relocated to the city to supervise the building.  He went, and his wife and six children remained in London.

Construction of the Custom House was a difficult project due to some opposition from local merchants and problems with the land at the site, and Gandon suffered an additional tragedy – the death of his wife.  Gandon brought his children to Dublin, and family settled and spent much of the rest of his working life in the city.  At the same time, Gandon’s work had caught many eyes.  While the Custom House was being built, he was invited to work on other projects. 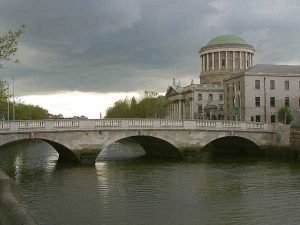 He first designed additions to the House of Parliament, and then went to work on the Four Courts.  He also designed the O’Connell Bridge, originally called the Carlisle Bridge, which spans the Liffey between the Custom House and the Four Courts.  In 1800, he was commissioned to build new premises for the King’s Inns, Ireland’s oldest school of law.  Gandon designed other buildings throughout Dublin and around the country, most notably Emo Court in County Laois.  Gandon’s work was often linked to the Wide Streets Commission, a governmental group to revamp the city and replace many tiny laneways with more modern, wider streets.

Gandon apparently loved Ireland, and his vision strongly influenced the city we know today.  Although history remembers him as a cheerful and amiable individual, he faced opposition to some of his projects and clearly had enemies with a personal dislike of him as well.  He did leave Ireland for some years, but returned and settled in Lucan, County Dublin upon his retirement.  The 1916 Uprising and subsequent war damaged some of his buildings, and some of his less famous efforts were destroyed over time.  But his main and most influential works, the Custom House, the Four Courts and the O’Connell Bridge, remain along the River Liffey flowing through the heart of the city.