Just a few days after St. Patrick’s Day comes another day that was rather popular in Ireland long before Patrick set foot on these shores.  The vernal equinox is on March 20th this year, and although it is less well known than the magic of the sun shining into Newgrange neolithic passage grave on the winter solstice, the rising sun offers an equally astonishing show at Cairn T at Loughcrew, County Meath, on both the vernal and autumnal equinox.

As the sun rises, the light flows in and slowly illuminates a passage, finally shining on a back stone decorated with elaborate carved symbols.  These ancient designs continue to inspire the creators of all sorts of Irish jewelry and crafts today. 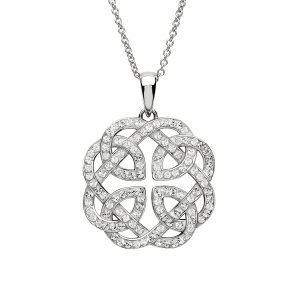 These ancient carins are older than the Pyramid of Giza in Egypt, and far more mysterious.  We know little about the people that created them, aside from the obvious observation that they were astonishingly good engineers to design such precise structures with such rudimentary tools.  Ireland’s Neolithic people did use a solar calendar, and their remaining structures show how well they understood it.  The Boyne Valley and surrounding area has a concentration of these incredible Neolithic structures.  Newgrange is the most famous, but there are there close to 40 known similar structures nearby, including several at Loughcrew in northern County Meath.  They have been described as passage graves, but there is much to indicate they were not just burial places.  Scholars now think they were more sophisticated ancient temples that were centers of astrological, spiritual and ceremonial importance.

What we do not know is exactly what the beliefs and practices were that inspired our ancestors to design and create these cairns.  Newgrange’s artwork uses a lot of spirals, most famously a triple spiral.  Some of the designs carved into the stone at Loughcrew’s Cairn T appear to be flowers, which does make sense in the spring.

We aren’t known for sparse or minimalist design either, in anything from ancient stone carvings to modern jewelry.  Celtic design throughout history has distinguished itself with elaborate detail and intricate, interlaced lines.  We see this detail today in everything from the complex cable knitting in Aran sweaters to the swirling knot work in Celtic pendants and other jewelry, and it is fascinating to see the roots of it carved into stone and majestically illuminated on these special days throughout the year.