Home > Blog > Jewelry Education > It’s All in What You Believe

But if I were to then ask you,”what do you believe about Ireland,” I would probably get a very different answer.

You might know that Dublin is the capital and that St. Patrick’s legend transpired in Ireland out of the few details that first come to one’s mind. However, what you believe about the Republic of Ireland might come from fact or fiction. Today, I thought it would be nice to highlight some of the most commonly observed traditions and items that make up Irish convention. After all, what makes the lifestyle in Ireland notable is not figures or features, but it is in what the people do and how they do it.

Irish culture is not an observable thing like the daily temperatures or water levels. In fact, it is all subjective. For starters, the Irish folks have a reputation for being very friendly. This is probably why so many people are proud to be Irish! By and large, the people in Ireland greet each other warmly with physical affection and even kissing. Another noticeable habit of the Irish is that they are quite easy going with scheduling and time. This is unlike other parts of the world where people live in much faster or stressful paces. Ireland has a opinion for being more carefree.

Next, without classic Irish food, we would not have Irish society. So, traditionally speaking, there are a few foods that are universally known as Irish. Examples are Colcannon, Irish Stew and bacon and cabbage.

Another Irish symbol well known to the world is the Irish flag. Yet, what it signifies is even more significant. The flag is composed of three colors.  First, the green element of the flag represents the Gaelic beliefs and that leads to mostly Roman Catohlics. Next, the orange portion on the opposite side of the flag represents the Protestant group in Ireland. And lastly, in the center of the flag is the white quadrant which served to be the unifier of the two very different factions.

Something like a cross can be worn by anyone for any reason. This cross here is our Celtic Silver Cross with a Gold Plate Trinity.  This lovely pendant is made of steling silver and has on each of it’s extensions diamonds resting. The triquetra in the center stands out in gold and reminds the wearer of an endless faith. Whatever it is that you believe in, you can wear this cross in confidence knowing the feeling is true to you and doesn’t necessarily speak to everyone. 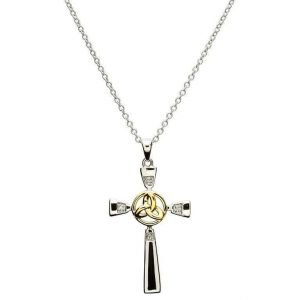 What we discussed here were just a few basic elements that make Irish folklore what it is. It is important to note that these commonly observed behaviors or things are just that, observations. It doesn’t make them facts or truths. They are generalizations. And it is refreshing to know that minds should always remain open.  For it is a fact,  that there are always exceptions to what people commonly consider certainties.