The Burren in County Clare is famous for its surreal rock landscape and ancient dolmen structures, but as compelling as those features are, there is another reason to love the Burren in the spring and summer.  As unlikely as it seems, that rock landscape that is often compared to the surface of the moon is also home to some fabulous flowers.

To many people, Irish flowers are what you see in formal gardens from Dublin’s gorgeous Botanic Gardens to the grounds of Kylemore Abbey in Connemara, County Galway.  But for those who prefer a walk on the wild side, the Burren is the ultimate place to view Irish wildflowers.  Bright flowers pushing up through cracks in the rock is a powerful image of determined grace and strength.

The sheer variety of flowers growing wild in the Burren is astonishing – especially considering that it is a mix of flowers that are normally found growing in different places and climates.  The 250 square kilometers of the Burren is so unusual and precious that most of the area is classified as a Special Area of Conservation.  So as tempting as those flowers are, do not pick them.  Not even one.  Ever.  But do bring a camera and capture stunning images that will last much longer.

What flowers can you expect to see in the Burren?  Of course it depends on the time of year, but in late summer you can enjoy these beauties:

Mountain Avens: These cheerful Alpine/ Artic flowers form carpets of white petals with yellow centers in two batches every year.  Late summer is the time for the second batch, and when they are done blooming, they develop their signature big fluffy seed heads.

Bloody Crane’s Bill: This colorfully named Mediterranean bloom has a long season, but towards autumn is a great time to spot them because the leaves are turning the deep red color that gives them their name.  The flowers themselves are a vibrant pink shade.

Yellow Wort: These tiny clusters of bright yellow flowers bloom from mid-summer to early autumn.  The plant itself is distinctive with leaves on alternating sides of the long stem, giving it its Irish name, dréimire buí, which translates as yellow ladder.

Marjoram: You can enjoy the sight and smell of this pink flowering herb.  It is another one that is more commonly associated with the Mediterranean region but grows wonderfully in the Burren.  It isn’t exactly rare; you can find it in any grocery store – in a jar labelled ‘oregano’.   It shares a name with the very similar plant that you’ll find in the jar labelled ‘marjoram’. 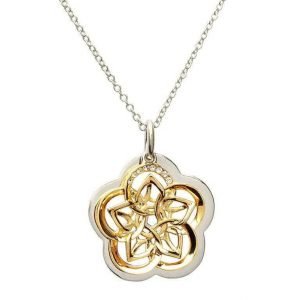 While the Burren may be better known for its amazing dolmens and ring forts, the traditional music of Doolin, Ailwee Caves, the high crosses in Kilfenora and the matchmaking festival in Lisdoonvarna, the stunning array of wildflowers is really the icing on the cake.  Ireland has a staggering treasury of man-made heritage from ancient ruins to modern literature, but the natural beauty of the country is reason enough to love it.