I really don’t need any fancy title for this article. Very few people can get away with a one word name, but this man can. His name is Bono and I think virtually everyone on the planet knows who he is.

He was born in Dublin as Paul David Hewson on May 10th in 1960. His family had a flexible view of raising their two sons and decided to rear one as a Christian and one as a Catholic. I tend to believe that perhaps his parents thought that in doing this it would teach their children to learn to live with differences and to co-exist with others in the world. You certainly see that in his future work and music.

Bono suffered misfortune when he was young with the passing of his mother from a brain aneurysm when she was grieving over the loss of her own father at his funeral. Although things like this were very traumatic for him, they helped to cultivate future lyrics and songs. Ironically, it was from a street gang from which Paul got his soon to be famous world-renowned name of Bono and he didn’t even really like the name at first. 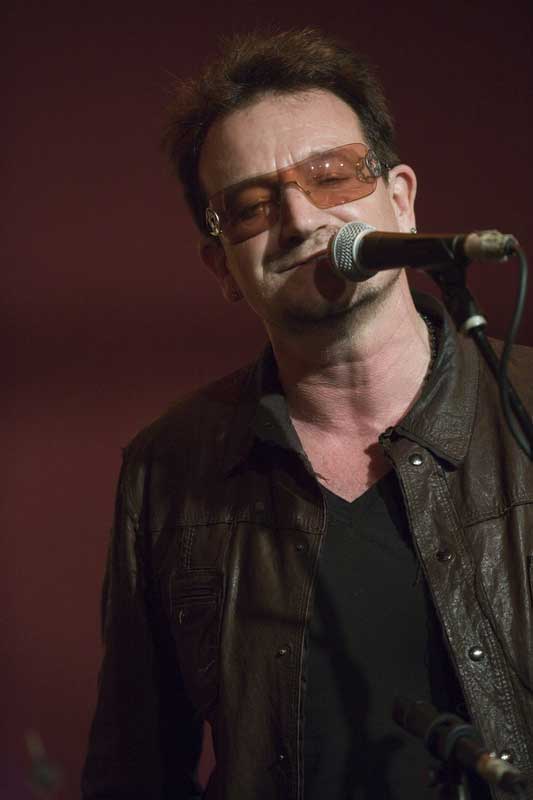 His work with U2 began in the late 1970s when he responded to an advertisement looking to form a band. This is where he met “the Edge”, Larry Mullen Jr. and Adam Clayton.  His brother started out with the band, but eventually left leaving U2 with just the remaining four members that we know of today as U2. In the beginning of U2’s formation just as in the start of any undertaking Bono and the others weren’t quite sure of where they fit in and he experimented with guitar playing and admitted to not being so great at it. Eventually, it was decided that he should focus on primarily singing since that is what he was best at and everyone would probably agree that was the best choice. The Edge became the central force for guitar playing, Clayton for bass and Mullen for the drums.

After this, success seemed to be in the bag for U2. It is said that Bono’s relatability to the audience is one of the biggest driving forces behind what makes them such a success. People can really feel his music and emotion as well as the message that he is trying to send to the public. It is often hard to deny. For example from:  “So Cruel”

“We crossed the lineWho pushed who overIt doesn’t matter to youIt matters to me..”

Most people can say they have felt feelings like this at some point in their life in some way which is what helps to make U2’s music so omnipresent.

Bono is the genius who writes most of the music of U2 and if that weren’t enough when he isn’t entertaining the masses he engages in an enormous amount of philanthropy therefore making this world a better place. He has met which many renowned people of noble ranks and received countless awards for his efforts. He has also received many awards for his musical work with U2.

I think what might make him most content is that he spends the rest of his time with his family; his wife and four children for which all of this hard work would be pointless. Perhaps, Bono might of put it best by saying,” what is the use of making the world a better place if it weren’t for our children and their futures.”