The Book of Kells, a literary goldmine from 800 AD is an illuminated manuscript of the Christian New Testament’s four gospels. It is currently displayed at the Trinity College library in Dublin, Ireland. The richness and detail of the book’s pictures make it the work of an angel. It is one of the most famous medieval illuminated manuscripts.

Throughout history, writers compliment the beauty of the letters, the portraits of the evangelists, and other images, which come with complex Celtic knotwork motifs and interlacing patterns.

“The work often gets recognition as the greatest manuscript of any era.”

The Book of Kells is a creation of the monks of Iona, Scotland of St. Columba’s order. However, the specific location of its birth is unknown. The book went missing for a brief period but luckily everything stayed intact. Because of the magnificence of the artwork, the work often gets recognition as the greatest manuscript of any era.

Academics believe that the book’s use was during the celebration of the mass. However, it is more likely for a display for the crowd. Today, it is displayed at Trinity library for enchanting people.

Why is The Book of Kells Famous? 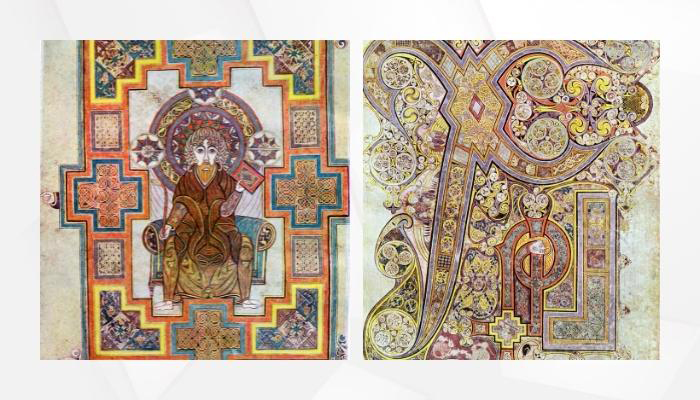 Further, The Book of Kells is one of the most reputed early medieval manuscripts. Even though The Book of Durrow, Lichfield Gospels, and Lindisfarne Gospels all belong to the same period, yet the Book of Kells holds a special place of reverence even among those three.

“The mystery articulated with such beauty makes The Book of Kells a valuable piece of literary history.”

To add to its value, The Book of Kells has a rather mysterious history. Unlike earlier manuscripts, the Book of Kells did not include a description of how it was made. The most widely held belief is that the book was either written on the island of Iona or that its production began there.

When Iona was sacked by Vikings, the book (and its author) fled to the Abbey of Kells, where it eventually ended up. This is the most widely accepted story. The mystery articulated with such beauty makes The Book of Kells a valuable piece of literary history.

Who Wrote the Book of Kells and Why? 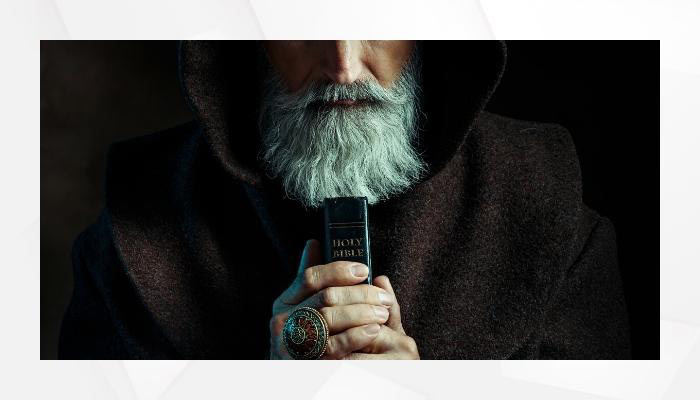 The Book of Kells is the work of the Columban monks of the order of Iona, Scotland in medieval Europe. The Lindisfarne gospels are added after the Viking raids.

Indeed, for centuries, people were under the impression that the book is St. Columba’s great Gospel. However, academics now believe the book is from around 800 AD, placing it in a later period of medieval Europe.

People believe that this book is only for display and ceremonial purposes and not for reading loudly. The reason for this is that the visuals are intricate and complex. Also, the text has a lot of repetition, with entire words missing.

Whereas the book of kells written remains an unknown fact. However, scholars believe that monks who lived in the Abbey of Kells Montessori wrote the book there. The Montessori is the most probable location for its creation.

What Does ‘Book of Kells’ Mean? 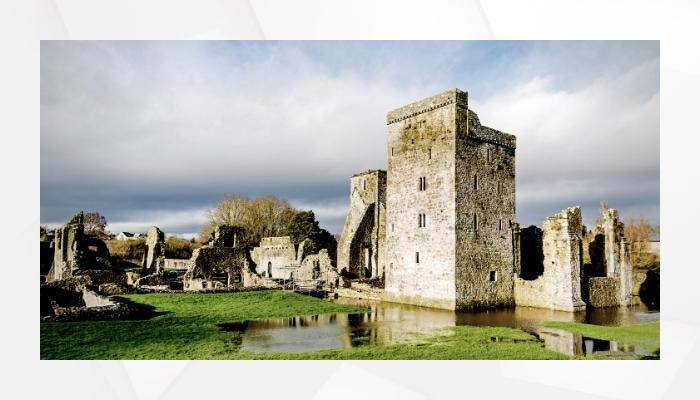 Kell and Kells are common Irish surnames originated from the word ‘ketill’ (old Norse), which means cauldron. However, the manuscript got its name from the Abbey of Kells, County Meath, Ireland. The Abbey of Kells was an Irish monastery founded in the early 9th century. Abbey was the home of the Book of Kells before its display in the library at Trinity.

The Montesory received plundering by Vikings several times in the early ninth century. There is no explanation for the survival of the book. A passage in the book Annals of Ulster contains the oldest historical reference to the book. It indeed certifies the book’s presence in Kells.

But who founded kells? St. Columba founded the Abbey of Kells around the year 554. It was after High King Diarmuid Mac Caroll of Tara gave the site for construction. The Abbey was built in Iona, and the construction lasted from 807 through the church’s consecration in 814.

Aesthetics and Text of the masterpiece 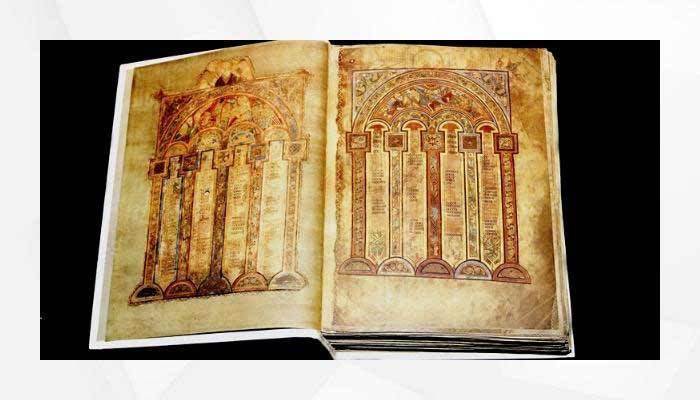 The book has pages of vellum with stunning imagery and Latin text. It measures 13×10 inches (33×25 cm). It includes the entire Matthew, Mark, and Luke gospels, as well as a portion of John’s gospel. The book also comes with indexes, cross-references, summaries, and commentary.

Before vanishing, the manuscript from the abbey in 1007 CE had a gold and jewel cover with interlacing patterns. The thieves are responsible for tearing the intricate binding from both front and back, resulting in the loss of portions of the folios at either end. This is probably the time when the Gospel of John was lost.

Because of their beauty, the letters illustrating the Chi-Rho (Christ’s monogram) look more living than the text on the page.

However, it’s also a belief that the makers didn’t duplicate John. The Book of Kells may be an incomplete manuscript, according to evidence.

The Creation and Artistry 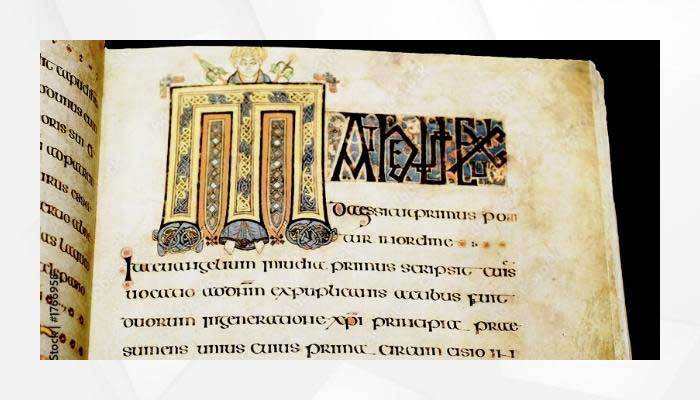 Between the 5th and 13th centuries CE, monks created illuminated manuscripts. The evolution of professional book-makers begins after the 13th century CE to fulfill the demand for literary writings. Scriptores were monks who worked on books and their writing rooms were called scriptoriums.

Monks are responsible for every step of the book-making process. From raising the animals whose hide is essential for the sheets to turning that skin into vellum and finally the end product, monks are there.

The next step included painting strokes across the vellum sheet to serve as text lines. Vacant spaces on the sides and borders are for drawings. One monk would write the text in black ink between these ruled lines first. It will then pass on to another monk to review.

The second monk would then add headings in blue or red ink and hand over the page to the illuminator who would add illustrations, color, and silver or gold illumination.

The Book of Kells — A Jewel in the Crown of Literature 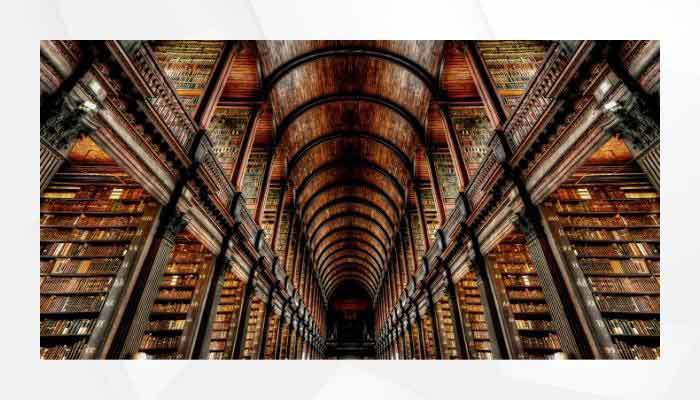 “For many in Ireland, it symbolizes the force of learning, the impact of Christianity on the country’s life, and the spirit of artistic imagination,” writes Bernard Meehan, one of the manuscript’s specialists.

The Book of Kells has even piqued filmmakers’ interest. The Secret of Kells, a film portraying a young boy’s obsession with the manuscript, has a nomination for an Academy Award. The Book of Kells also has a Creative Commons Attribution.

Many current visitors may not find it convincing, but have a look at the pictures for yourself and you will transport into a fascinating world of remarkable talent.