There are a handful of natural marvels in this world. We have the Grand Canyon, the Great Pyramids and the Great Wall of China for starters. Ireland is fortunate to have at least one phenomenon that for centuries mystified and mesmerized locals and visitors alike.

I am referring to Giant’s Causeway which if you had never heard of it before might sound like a roadway or a bridge over water. Unlike what it’s name may suggest, it is not a road at all. It is in fact, something that qualified as a natural portent of the world. 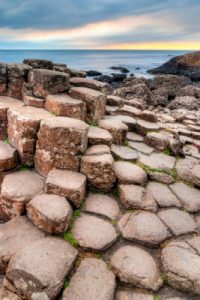 We can begin with the notion that the landmark began millions of years ago from a volcanic eruption. The severity of the lava flows and their melding with the landscape resulted in peculiar shapes that formed an impressive scene. It would be near impossible to ignore the display.

The red basalt landscape carved columns that project vertically alongside the cliffs of Northern Ireland. In places where the shapes are parallel to the ground, they have settled to make up what appears to be a mosaic or a floor made up of hexagon-shaped tiles.

Initially, people debated how the area was created. Some hypothesized whether it had been made from man, a god or perhaps even a giant. Folk legend even joined into the speculation and an entire fable was conjured that told of a story between two opposing forces.

The story revolved around two giants named Finn MacCool of Ireland and Benandonner of Scotland. Benandonner challenged Finn to a fight and Finn accepted. A road or causeway was built that linked Scotland to Ireland so the giants could meet.  According to this tale,  Finn got scared once he realized the size of his opponent and therefore hid.  His wife disguised him as a baby and once Benandonner saw the enormous breadth of the child, he believed that it’s father, Finn, must be enormous. In his panic, he fled back to Scotland destroying the causeway behind him.

Across the sea In Scotland, there are pieces of what looks like Giant’s Causeway on the coastline. Evidently, this is how the two places were linked together in the story.

Today, we are aware that the causeway was not created by giants, but instead it was made by lava some millions of years ago. The fact that it still remains complete today is a true testament to how sturdy and rugged it is to have withstood all of this time and remained nearly unchanged.

See the Official Guide to Giant’s Causeway for more information.