Brilliant blue sapphire is one of the most delicious gems.  It’s the birthstone for September, and the centerpiece of one of the most famous engagement rings in recent history – that given to Diana by Prince Charles. 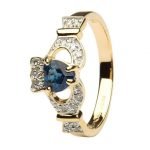 What makes September birthdays so special?  It’s a beautiful time of the year in many parts of the world – the last of the summer weather with autumn just ahead.  The school year is starting, which means new friends and fresh starts for students (and a bit of a break for parents).  Those born in September have the spectacular sapphire as their birthstone and the lovely aster as their birth flower.

Some very talented people enjoy September birthdays.  Singer Beyoncé Knowles and comedian Damon Wayans were both born on the 4th.  Singers Pink and Patsy Cline share a birthday on the 8th.  Actor Will Smith celebrates his birthday on the 25th.  Activist, author and Holocaust survivor Elie Wiesel, who died earlier this year, was born on the 30th.

Sapphire is a close cousin of ruby.  Both are variations of the mineral corundum.  Sapphire and ruby are almost as hard as diamonds, ranking a 9 on the Mohs scale.  Traces of elements such as iron and copper give these gems their dazzling color.  Sapphire has been found in various parts of Asia, Africa, Australia and North America. 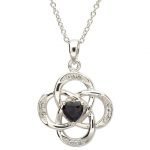 The brilliant blue sapphire has been associated with loyalty and sincerity, and believed to protect the wearer against envy.  Those qualities combined with its stunning beauty have made the sapphire a popular gem for romantic gifts and engagement rings. 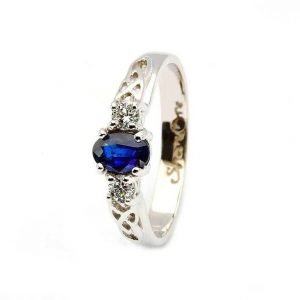 When Prince Charles proposed to Lady Diana Spencer in 1981, he gave her a spectacular sapphire and diamond engagement ring.  Diana chose the ring herself, and it was perfect with her deep blue eyes. Their son Prince William gave the ring to his bride, Kate Middleton.  Media reports say he felt this was a way to have his mother, who died in 1997, involved and remembered at his wedding. 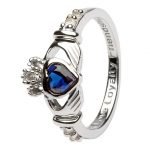 Sapphire is a great gem to use in Irish jewelry.  While we now see green as the color of Ireland, long ago, blue was used to represent Ireland.  Blue was associated with St. Patrick, and an early version of the Irish Citizen Army flag created by Constance Markievicz showed the starry plough on a blue background.  Ireland’s first coat of arms was a harp on a blue background.  So the sapphire looks just right in a Claddagh ring or a Celtic pendant.  Dubliners might be especially delighted as their county colors are dark blue and light blue.

Given that the sapphire symbolizes loyalty and sincerity, it isn’t a huge surprise that it is the traditional gift for both the 45th and 65th wedding anniversary is sapphire.   Just like true love, the sapphire is a beautiful, durable and hard-wearing treasure that you want to treat with great care.  Jewelry featuring a sapphire is an ideal birthday present for a woman celebrating a birthday in September.