The Celtic Crosses of Clonmacnoise | ShanOre Jewelry
Skip to content

The Celtic cross is one of the most popular symbols in Irish jewelry, beloved for its beautiful design and rich detail as much as for its meaning.  The Irish countryside is dotted with Celtic crosses.  While they aren’t as numerous as sheep, it would be hard to drive across the country without passing a ruined site, church or graveyard with at least one Celtic cross standing tall with its distinctive ring.  One of the most famous spots for Celtic crosses is Clonmacnoise in County Offaly, right in the heart of the Irish midlands. 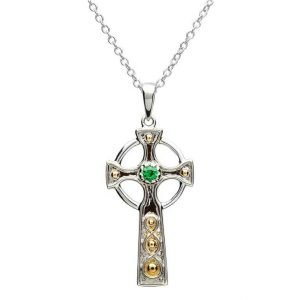 Clonmacnoise is the site of not one but three Celtic crosses.  It is a stunning monastic ruin founded by St. Ciaran in the middle of the sixth century.  If a visitor had time for only one ancient site in Ireland, Clonmacnoise would tick all of the boxes.  It features the three Celtic crosses along with two round towers, a cathedral, seven churches and an interpretive center.  One more thing – it is also home to Western Europe’s largest collection of Early Christian grave slabs.  Among the dead buried there are the High Kings of Tara.  Oh, and it’s on the banks of the majestic Shannon river.    Despite the intense competition from the other features, the Celtic crosses are the shining stars of this show.

Anyone who loves Celtic cross jewelry should know a little bit about the Irish crosses that inspire those gorgeous pendants and earrings.  The three Celtic crosses of Clonmacnoise are a great place to start. 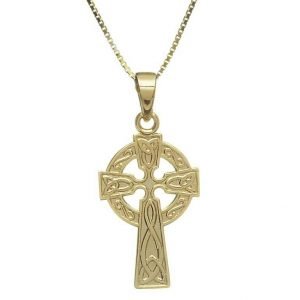 The North Cross, which dates back to about 800 AD, is the oldest of the three, and intriguingly, it is decorated with what is believed to be the image of a Celtic hunting and fertility god.  Today only the base and shaft remain.  The Cross of the Scriptures towers above the others at four meters in height.  It is the most detailed with panels depicting the crucifixion, the last supper and Christ in the tomb.    The Office of Public Works has moved it inside the interpretive center to protect it, and a replica is in its original location.  The South Cross is also inside the center with a replica in its previous location.  It features a carving of the crucifixion.  Both the Cross of the Scriptures and the South Cross were made circa 900 AD, but the South Cross is older.

The Irish High Crosses at Clonmacnoise are not the only famous ones, but it is remarkable to have three of such age and quality in one location.  The beautiful Celtic crosses around the country have inspired artists and craftsmen throughout the centuries to create everything from more carved standing crosses to Celtic cross jewelry to miniature decorative crosses for the home to tattoos designs.  These beautifully detailed stone crosses and their replicas in all forms are an enduring symbol of Ireland.  If you are lucky enough to visit Clonmacnoise, pause for a moment and consider how many have stood there before you through the centuries.