The Claddagh ring is one of the most distinctive pieces of Irish jewelry. It’s popular as a gift and a souvenir of a visit to Galway. Irish jewelry designs are symbolic and sometimes associated with different locations, and the Claddagh is certainly no exception. Read further to discover the Claddagh Ring Meaning and Its romantic story.

What is the Claddagh Ring Meaning?

The Irish Claddagh has a beautiful meaning and romantic history. The iconic design features a heart held in two hands with a crown above it. The Claddagh ring meaning is found in these three symbols.

The heart means love. The two hands represent friendship. And the crown above the heart symbolizes loyalty. Together, they make a beautiful statement, whether it refers to romantic love and the love between two dear friends.

Claddagh rings are not all the same. Some are gold, while others are silver. They range from very minimal bands to dazzling rings set with gems such as diamonds and emeralds. But the meaning is always the same: love, loyalty, and friendship. 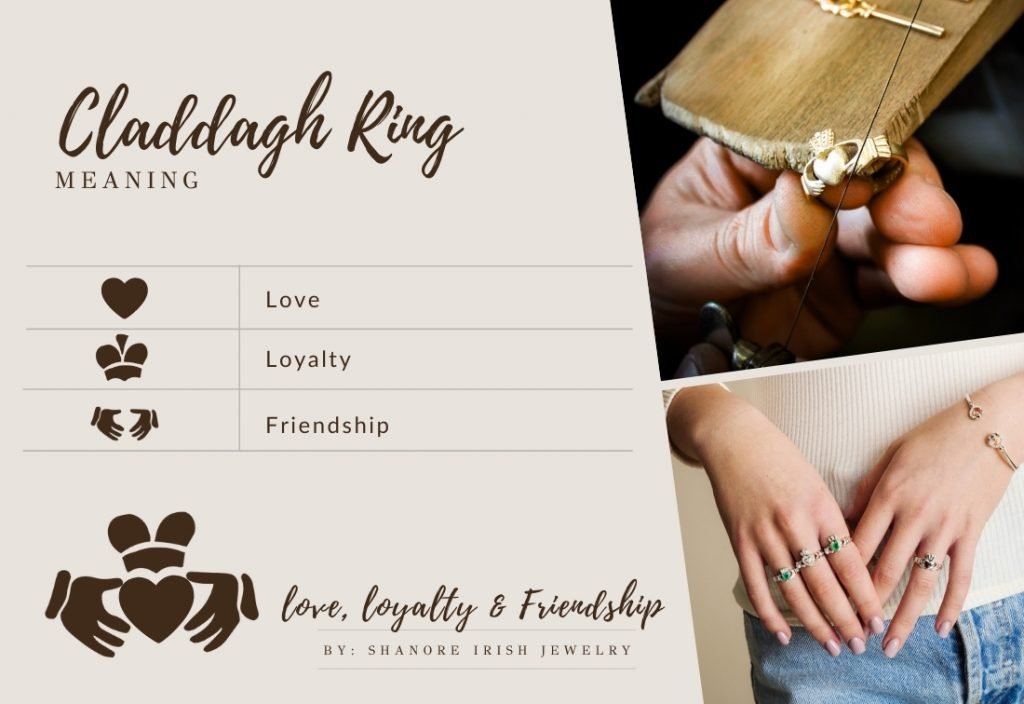 How to Wear a Claddagh Ring

The Claddagh meaning is also in how you wear the ring, not whether it is silver or gold, plain or adorned with dazzling gems. You can wear a Claddagh ring in four different ways:

How to Wear a Claddagh Ring if you are single: Wear the ring on your right ring finger with the point at the bottom of the heart toward your fingertips.

How to Wear a Claddagh Ring if you are engaged: To say you are engaged, wear it on your left ring finger with the point of the heart toward your fingertips.

How to Wear a Claddagh Ring if you are married: Wear the ring on your left finger with the crown toward your fingertips as a wedding ring.

You can wear your Claddagh ring every day or just when you feel like it. In fact, you can have a collection of them to go with different outfits, moods, and occasions! A plain silver one is perfect for a casual day in your jeans, and a gold one with sparkling gems can add the perfect touch when you are dressing up.

The iconic Claddagh design began as a ring, but it has grown to grace Claddagh Necklaces and many other items now. While a Claddagh ring can make a statement about your relationship, other items using the Claddagh design don’t. They say that you love something about Ireland. hand with the heart 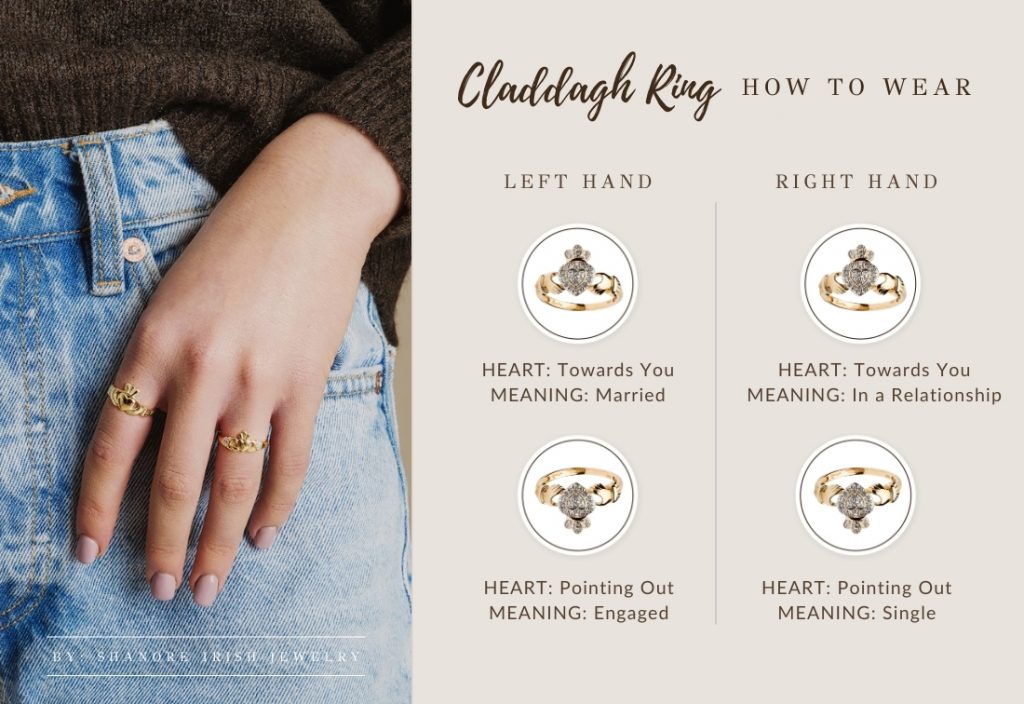 Origins of the Irish Claddagh Ring

The origin of the ring has a romantic story behind it. The design is named for a fishing village on Galway Bay. ‘Cladach’ is the Irish word for shore, and the Claddagh is a small, rocky outcrop into the bay. In the 17th century, a young fisherman named Richard Joyce lived here, and so did the woman he planned to marry.

One ordinary day in 1675, he set sail. Instead of spending a normal day fishing and returning in the evening, Joyce was captured by pirates.

The pirates brought him to the city of Algiers in North Africa, where he was sold into servitude. He spent 14 years working for a goldsmith who taught Joyce the craft. He had a talent for it and a gift for design. But his heart was breaking because the woman he loved was back in Galway.

Inspired by the Fede rings and his longing for his beloved back home, he designed the iconic Claddagh ring. He built on the symbolism of friendship, emphasizing love by putting the heart in the center and adding the crown to represent loyalty.

At the time, Fede rings were very popular. The Fede design, which dates back to ancient Rome, features two clasped hands. These rings were token of friendship. Occasionally, they featured a heart in the design.

Loyalty must have been on his mind a lot as he spent his little spare time perfecting his design and dreaming of the woman back home. With no way to contact each other, he could only pray she had not given up on him returning.

In 1689 Joyce eventually gained his freedom. He returned to the woman he loved in Galway bringing one of his rings with him for her. And yes, she had waited for him and they wed soon after his return.

Joyce settled in Galway with his bride. He gave up fishing for goldsmithing, and his signature Claddagh ring was a huge success. Initially, local people got them as a symbol of their area, but eventually as more people saw them, their popularity grew and grew. Today, people around the world love them and proudly wear them.

Have you heard any strange stories about Claddagh rings? We have, and we’re happy to set the record straight.

Can you wear a Claddagh ring if you’re not Irish? Are they only for women?

Anyone can wear a Claddagh ring. Remember, technically the design was created in North Africa. From what we know, Joyce was happy to see so many different people enjoying his design.

Is it bad luck to buy yourself a Claddagh ring?

Of course not, it is always lovely to receive a Claddagh ring as a gift, but you can also buy one for yourself. Many people do, and we’ve heard no reports of bad luck. Most of Joyce’s original customers bought the rings for themselves.

Is the Claddagh a religious symbol?

Unlike many of Ireland’s other symbols, the Claddagh has no religious element at all. As far as we know, Joyce was Christian, but that does not figure into his design. Its roots are in the Fede ring, not in any of Ireland’s pre-Christian symbols. 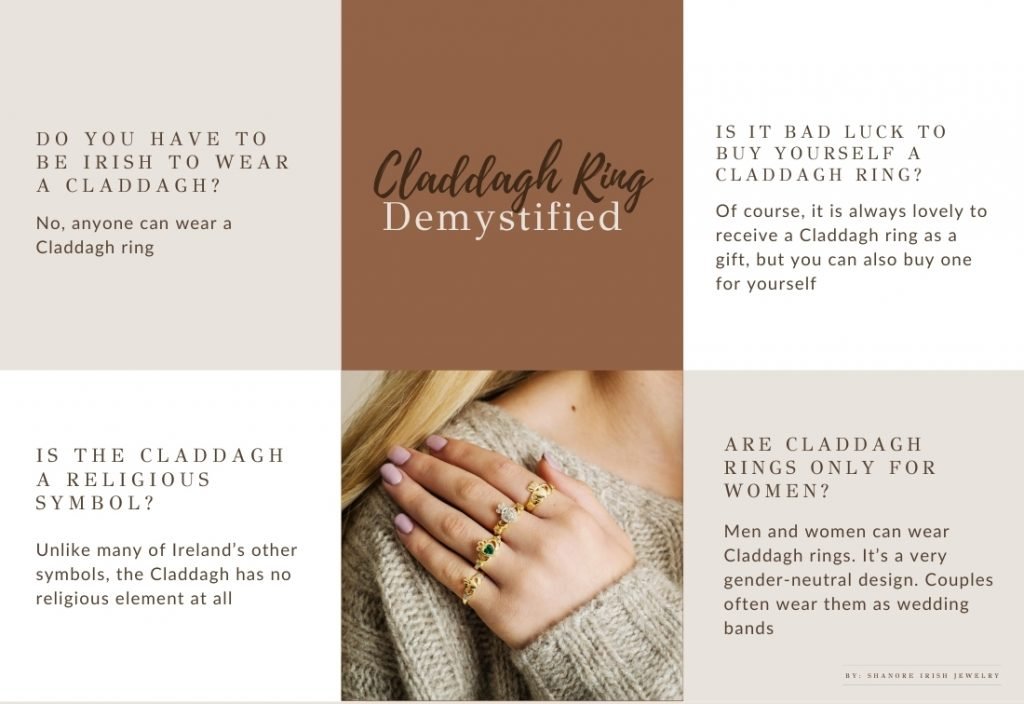 Claddagh rings have spread around the world. Irish people have brought them to different places, and visitors to Galway have brought them home with them too. Today, Irish Claddagh rings are popular engagement rings. The symbolism is perfect, and so is the story of their origin. A relationship based on love, loyalty, and friendship deserves a beautiful and meaningful engagement ring. A Claddagh on your left ring finger pointed out makes it clear a wedding is on your horizon.

When Richard Joyce designed the first Claddagh ring for his beloved fiancée back home, he could never have imagined how popular his design would become. Now when you wear a Claddagh ring, it can show off your relationship status, your love of Irish culture, or just your excellent taste. Knowing the origin of the Claddagh and its meaning of love, loyalty, friendship, makes wearing one even more special.

GET INSPIRED BY OUR CLADDAGH COLLECTION