Stars are ever abundant depending on where you look  You can see them in artwork in many different forms, aside from celebrity types.  There are also the astral types you see in the skies at nighttime and of course the kinds that sometimes adorn jewelry.

When I think of stars, I immediately remember the painting “Starry Starry Night” that I had on my wall for quite some time in college by Vincent Van Gogh. I love artwork and that was my favorite piece by him. Or perhaps I can reminisce about the millions of stars that I saw in my summers spent working in New Mexico. I could literally count dozens of shooting stars in just one night sleeping under the New Mexico night skies. There are certain corners of the world where you can get so much closer to the night sky then anywhere else in the world and for me that was one of them.

I believe that everyone has that place for them that reminds them of that “Starry Starry Night” like mine or their own New Mexico summers, at least I do hope so. What we have here is something that can transcend that memory of a starry night or a beautiful memory and meld it into a pendant. A first choice is the Celtic Silver Claddagh Star Pendant. Some readers may have that experience in Ireland and this would make this a perfect fit and even if not, the star still makes such a symbolic impression made out of sterling silver.  A second choice is the Celtic Silver Trinity Star Pendant which differs in just that it has a trinity knot centrally located in the heart of the star.

Now that it is January, I did not want to leave out that there are some perfect opportunities for stargazing with your new pendants in tow. Some constellations worth seeing in this month are Mensa, which is only faintly seen around the 30th of the month and definitely one to gaze at is the cluster of Orion which is visible in both the Northern and Southern hemispheres around January 25th. Orion is viewed as one of the brightest and most beautiful constellations in the winter skies. He was placed in the cosmos by the gods with his animals that he had hunted. 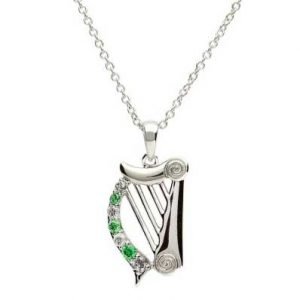 Finally, the gods could not go without their muses which is why we have the Silver Celtic Harp Design Pendant. This sterling silver design is appropriate to make any god or goddess very pleased. So whichever pendant you chose whether it is stars or a goddess inspired one, make an evening of it under the stars wherever you consider your “Starry Starry Night.”