This Couple Did It Right | ShanOre Jewelry
Skip to content

Home > Blog > Jewelry Education > This Couple Did It Right!

So much of our talk involving Ireland, love and the like revolves around a certain air. Most of us get the vision of romance when we ponder something like a wedding in Ireland.

And why wouldn’t we?

Ireland is chalk-full of castles which scream, “sweep-me-off-my-feet-in-custom-style!” The panorama is just beautiful with green fields, lovely sunsets and free-ranging animals. Ireland is a classic place that seems to have been taken out of a fairy tale. Who wouldn’t want to get married there? 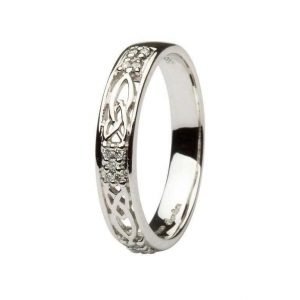 might particularly like the region. This time in World History was famous for England taking a dominant look at their country and position in the world. They wanted to control as much as possible. And as it goes, the direction England took would have an enormous impact on Irish culture.

Britain took over Ireland completely and unilaterally. Since England was heavily Protestant, this formed a central clash with the many Catholics who resided in Ireland. Ireland took on the feel of London which therefore brought so many unknowns to the scene.
(pictured above: Ladies Celtic Trinity Knot Diamond Wedding Band)

Perhaps it is me, but it seems being dominated and commanded by another country without autonomy would make for a terrible state of affairs. And so it goes why this time was such a trying one for Ireland.

The reason I say this is quite simple. What comes from unreasonable times and requests is often the stuff that make up legends.

(Watch this video of Kevin and Donna at their wedding. They kept it a bit traditional, but they also knew how to blow it out of the park.)

And epic is exactly what the people in Ireland got for a very long time; if not just because people had a truly romantic nature at heart, but also because it was actually sort of a necessity.

I say necessity because when you picture yourself or your ancestors living in such a way where every little thing they did was monitored and ordered, eventually someone somewhere was going to break loose. Usually the ways people did this was with their personal life. A quote one might have likely heard might have sounded like,”If England says I can’t practice such and such a religion and I must do this and that, well, then… I am definitely going to beseech whichever maiden I want to!”

It starts with a simple thought or desire that one refuses to give up. And this my friends is how legends are made.