Crann Bethadh is otherwise known as the “tree of life” has been a Celtic symbol for centuries. The history of this symbol is deeply rooted in religious and personal convictions among various other postulates.

For instance, when land was newly acquired centuries ago in Ireland, the founders would plant or establish a tree within that perimeter. Typically this tree would be found in the centre of the village. From there, it would take on meanings for everything that the townspeople held close. Public servants were appointed at this spot, as well as, gatherings that were commonly held underneath the crann bethadh’s canopies. The locals believed that decisions and relevant information would come readily there since the tree was thought to be directly linked to the gods and humanity. 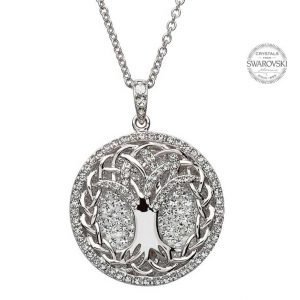 This design comes from our recent collaboration with Swarovski®. Our tree of life pendent is a one of a kind piece that embodies style and meaning. This deep symbol is beautifully adorned with clear, Swarovski® crystals.

The roots of the crann bethadh typically symbolized human life while the branches personified the gods. The Druids believed that this tree and that trees, in general, had much spiritual significance. For instance, the roots came from beneath the earth’s surface. Then the tree would grow tall and eventually have branches that reached far into the sky. This compared to roots coming from where people were placed once they departed the physical world. As it grew, the stems projected towards the heavens. In other words, if God had a telephone or email system, the tree would be it.

As the centrifugal figure in most dwelling places, the tree of life took on many purposes. For example, it provided for shelter from storms and gave warmth in the form of firewood. It also allowed for food sources since many species relied on the tree for support. People could therefore use it as a way of gaining nourishment. In fact, it is common to get medicinal and therapeutic remedies from the bark and leaves of trees.

It is clear that through much introspection, the tree of life is quite significant. Looking for strength or questioning one’s relevance to this planet is a common need for humans. And it is a need that could be achieved by searching the tree of life.

I imagine that the gods communicate once you are firmly attuned to their symbols. An example I find relevant is that I always feel most grounded while on my bare feet. I realize the strength I get probably comes from beneath me and from things that are unseen. Regardless, that power enables me to reach higher to the divine and to the things which are unknown to most. And I personally cannot think of a better description of the wisdom which comes from the crann bethadh.