The traditional Irish dances in formation known as the Ceili dance and other folk Irish dances were brought to popularity by Michael Flatley when he performed these dances and titled his productions “Riverdance,””Lord of the Dance, “Feet of Flames,” and “Celtic Tiger” in the late 1990’s and throughout the early 2000’s.

Flatley was born in Chicago and is an Irish-American who began dancing at an early age.  He was the first non-European to win an award for Irish dance at only twelve years of age.  As well as being a great dancer with wonderful potential, Michael also was a boxer and flute player.  After Flately graduated high school, he opened his own dance studio. 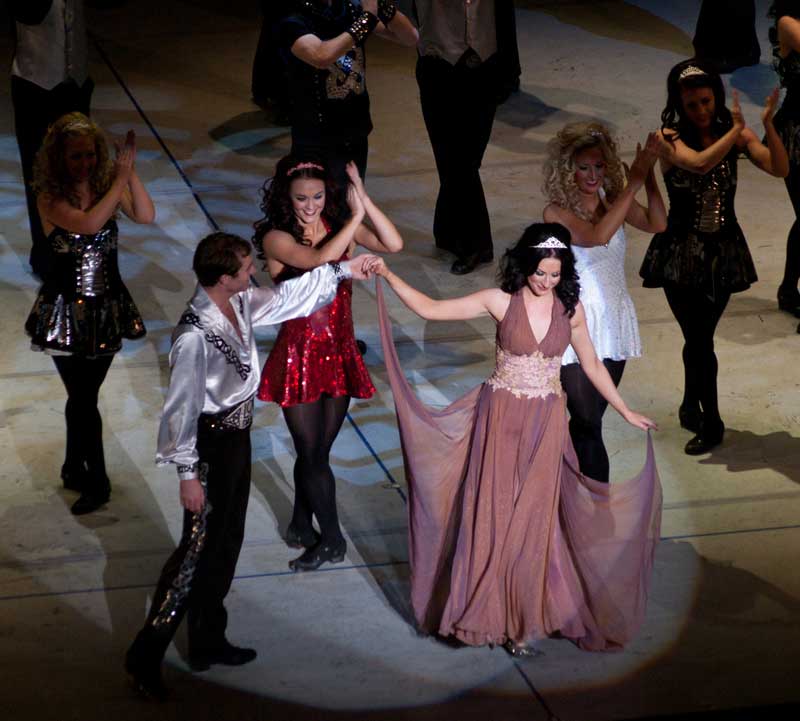 Michael went on to become the first American to win the World Irish Dance Championships and Flatley also won awards for his talents with the flute in Ireland.  Most phenomenally he was registered with the Guinness Book of World Records for his tapping speed in 1989 in which he measured twenty-eight taps per second.

For the traditional dances that Flately had learned and performed there is one commonly incorporated into the one seen in many performances known as the Irish stepdance. As Flately demonstrated, this dance can be performed either alone or by groups of people and one or two choices of shoes are commonly worn. The first choice being a louder tap shoe which is seen in the Riverdance shows or the second choice is that of a ballet slipper which would make no noise at all.  The purpose of the Irish stepdance is to focus all of the energy into the lower body, namely the feet as the dancers tighten up their upper bodies and focus primarily on moving their feet in quick and puzzling ways that both delight and fascinate the viewers.

This style of dance was influenced mainly by the quadrille dances or four couple dances of pre-Christian Ireland. There are several different types of Irish stepdances common such as reel, slip, jig, hornpipe and jig however they are also types of traditional Irish music too.  These stepdances are each broken down depending on the instructor, sequence and the ability of the student being taught.

The performers would typically wear Irish costumes sometimes adhering to rules set forth by the judges of the completion.  Oftentimes, groups entering into events and competitions would perform an Irish stepdance for a parade or festival like St. Patrick’s Day even.  This is a unique form of dance in that just as many males are interested in it as females are and their are guidelines for both male and female entrants.