Pushing the boundaries of art and social convention, Irish designer Eileen Gray left a unique legacy.  Her stark but beautiful minimalism was pragmatic as well as elegant. 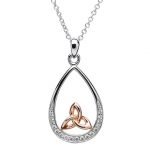 Eileen Gray never became a household name, but her vision of practical elegance has shaped much of what we see around us.  She felt that our homes and furniture should be equally functional and fabulous, and she put the purpose of her creations first.  That’s not to say that they lacked style.  They were stunning.  She was a revolutionary designer and a woman who defied the sexist social conventions of her time in her personal and professional life.

Born near Enniscorthy, Co. Wexford in 1878, Gray was the youngest of five siblings.  Her father was a painter, and her mother a baroness.  Her parents separated when she was young, and Gray grew up splitting her time between Ireland and England.

At age 20, she became one of the first women to attend the Slade School of Fine Art in London.  She studied painting initially, but soon found her passion for furniture making and lacquer.  She settled in Paris and embraced the freedoms life there offered.  She opened her own gallery and was constantly at the cutting edge of modern design.

From Simple Furniture to Houses

Her first works were lacquered screens, and she moved on to basic pieces of furniture.  Gray felt that furniture should be designed with its specific use in mind, and her sleek pieces were extremely practical and comfortable.  She worked in steel tube, chrome and glass.  Her simple round tables are among her more recognized works.  The tabletop was small, and the base was along the side or angled so that the table could be pulled over the user’s lap without table legs causing annoyance.

Gray’s masterpiece was a house she built in the South of France in 1929.    The dwelling, known as E1027, was revolutionary at the time.  Gray designed the house with attention to movement of the sun and the wind as well as how she and her partner of the time would use it.

Texture and light matter enormously in E1027, which is perhaps why an incident with Le Corbusier angered Gray so much.  The famous architect was said to be dismayed that a woman designed a structure to rival his own creations.  He came to visit the house, and while he was there painted several murals uninvited.  Gray described his actions as ‘vandalism’.

Some of Eileen Gray’s work is on exhibit at the National Museum of Ireland.   E1027 had fallen into disrepair after WWII and decades of neglect, but has now been renovated.  It can be viewed by appointment.  Gray’s furniture designs are being produced and have long been imitated.  A film about the conflict between her and Le Corbusier, The Price of Desire, is being released.  After long neglect, this innovative Irish designer is finally getting some long overdue recognition.