Malahide is a quaint little town that has exponentially grown in size over the
last century off the coast of Ireland just north of Dublin. It has many links to the past from that of being the birthplace of several notable people to being the location where the Talbot family reigned in most of their land. In the 15th century, the head of the Talbot’s was granted a supreme status of Malahide and with that his family had already culminated what we know today as Malahide Castle and much of the surrounding areas.

Malahide the Castle began much earlier than the 15th century, however. It was three centuries previous to this when Richard Talbot was given these lands by the then King of England, Henry the 2nd. The Talbot family was thus able to retain the estate in their family and thus survived incredible misfortunes along the way for hundreds of years. Even during the process, they were successful in creating their own title of Baron Talbot de Malahide twice for two members of their family on two distinctly separate occasions.

What they created is what remains as such an impressive site today which is Malahide Casltle and the growth and popularity that surrounds it’s formation. The castle itself is under the direct control of Fingal County Council currently which means the government regulates and monitors the grounds. This allows a bulk of the the castle to be used as a touristic revenue for those who visit Dublin and that the Republic is safely able to capitalize on this remarkable landmark. 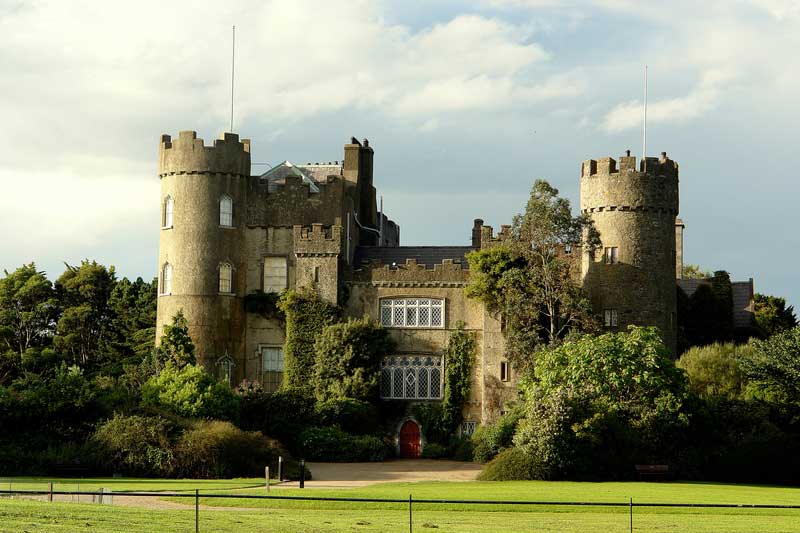 According to Malahide Castle’s official website, they are open everyday at 9:30 a.m. There is a fee to get in to see the castle respectively at only about $12 for adults, $6 for children and $7.50 for senior citizens. They also have special pricing available for families who are traveling which makes a visit to this castle quite economical.

They also offer a private Gothic Hall that can be obtained for a separate fee for those wanting to host private events. Malahide also offers a spectacular botanical garden escape for those who are so inclined. All included the gardens cover 22 acres of the property and consists of over 5,000 different species of plants from all across the globe.

Malahide also offers a demesne which proves to be one of the few lasting representations of a landscaped park from it’s time. It includes a playground, tennis courts, a golf course, a cricket pitch and picnic areas. Due to the fact that Malahide was recently redeveloped, there is much more interest into seeing the castle and it’s grounds because of all of the work and energy put into maintaining the property

Finally, as if all of that were not enough, Malahide offers one added incentive which is it’s recent highlight of musical venues appearing on site. In the recent years, Malahide has been guest to the Arctic Monkeys, Radiohead and even Prince. For a list of upcoming venues and how to get tickets please see this link here.