You can’t go too far in Ireland without discovering some amazing bit of history or stunning scenic wonder, but there are a few spots that rank as must-see destinations for visitors.  While the entire Atlantic coastline is beautiful, the Cliffs of Moher in County Clare are exceptionally awe-inspiring.  Their profile is as famous as the skylines of major capital cities such as New York and Paris.  You can find it on souvenir shirts, jewelry, posters, and of course postcards.  It is iconic. 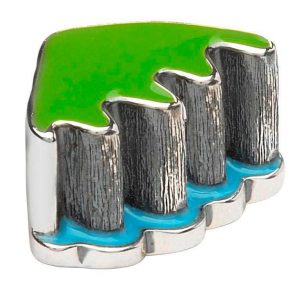 The undulating outline of the Cliffs of Moher resembles a stone shadow of the mighty, rolling waves of the Atlantic Ocean.  Visitors to the award-winning interpretive center, The Atlantic Edge, can stand more than 200 meters above the ocean and survey a panoramic view of the Aran Islands, Hags Head, and Galway Bay on a clear day.  The cliffs cover eight kilometers of the western coastline.

The Cliffs of Moher developed more than 300 million years ago, long before there were tourists to marvel at them.  They are a mix of sandstone, shale, and siltstone and are also full of fossils, making them extremely popular with geologists.  The cliffs were created over time by the movement of the earth and the waves, and that movement has not entirely stopped.  Sea caves can be seen along the lower part of the cliffs.  Erosion is a problem today, and occasionally bits of the cliff’s edge go crashing down to the sea – a dramatic sight best seen from a distance.  Although this natural wonder seems eternal, it might not always be there as it is today.

Visitors should be careful not to get too close to the edge of the cliffs and to obey all warning signs lest they fall victim to the powerful gusts of wind that pound the cliffs.  After all, there is a lot more of Ireland to see so it makes sense to survive a visit to this sheer and stunning spectacle of nature.

O’Brien’s Tower stands near the interpretive center, adding a touch of man-made beauty to the dramatic scenery, reminding visitors that they are not the first.  People have been marveling at the dramatic cliffs for millennia.  Cornelius O’Brien, a decedent of Brian Boru, built the tower in 1835 as an observation tower for early tourists.  In other words, the Irish have always been aware of the powerful draw our natural beauty holds for visitors.

County Clare is crowded with enticing destinations.  The tiny village of Doolin, famous for its traditional music sessions in local pubs, is an essential stop for music lovers.  The amazing wildflowers and ancient dolmans of the Burren are a must-see.  Lisdoonvarna is famous for its annual matchmaking festival.  But the Cliffs of Moher are far and away from the most dramatic and dazzling spot in the county.