Home > Blog > Irish Culture > Ever Wonder Why Ireland Is Called the Emerald Isle?

We don’t have any emerald mines, so how did Ireland get the nickname the Emerald Isle?  If you’ve ever seen a photo of Ireland, especially an aerial view, the answer seems pretty obvious.  Ireland is famous for rolling green hills, after all, and is said to offer 40 shades of green, which seems like an understatement this time of year.  But there is a bit more to the story than that obvious answer.  We don’t know for absolute certain when the phrase ‘the Emerald Isle’ was first spoken, but we do know when it first appeared in print.  It featured in a poem, of course. 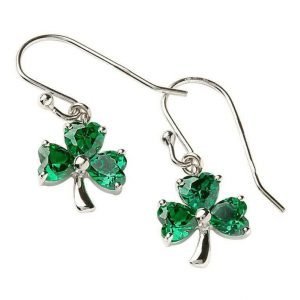 The poet, physician and political activist William Drennan gets the credit for coining the phrase in his 1795 poem When Erin First Rose, which opens with the verse:

When Erin first rose from the dark swelling flood,

God bless’d the green island and saw it was good;

The em’rald of Europe, it sparkled and shone,

In the ring of the world the most precious stone.

Later in the poem, he says:

Let no feeling of vengeance presume to defile

The cause of, or men of, the Emerald Isle.

The poem is a lament of sorts for the violence wrought here by forces loyal to the British crown and the struggle for freedom and independence.  Drennan, along with Wolfe Tone, was a founding member of The Society of United Irishmen.

The image of Ireland as an emerald, a sparkling jewel, became enduringly popular.  All around the world, Irish pubs, bands and cultural organizations use the word ‘emerald’ in their title.  The gem is one of the most known symbols of Ireland, although it is not used by the government as the harp is and not often depicted in images as the shamrock is.  Irish jewelry often features green gemstones in place of emeralds, especially with other symbols such as the Claddagh and the shamrock.

Although ‘emerald’ is often used to describe a specific shade of lustrous green, emeralds themselves can range in color from a bluish green to a yellowish green, much like the 40 shades of green celebrated in Ireland’s verdant landscape.   The Irish landscape, however, has not yielded any actual emeralds.  The gems are primarily mined in Columbia and Zambia.  Emeralds were mined in Egypt since antiquity, but today most Irish jewelry uses green gemstones that look like emeralds.  Few people could afford genuine emeralds, and fewer still would risk wearing them for a night out.

Given their wide geographic distribution, it isn’t a surprise that Ireland is not the only place described as the emerald isle.  There are places officially named Emerald Isle in Canada’s Northwest Territories and the USA’s North Carolina.  Other places throughout the world share the nickname emerald isle with Ireland, including Phú Quóc in Vietnam, Lesbos in Greece, St. John’s Island in Egypt and Monserrat in the Caribbean.  But however delightful those places are, if you tell people you are going to visit the emerald isle, they’d be surprised if you meant anywhere other than Ireland.