Religiously motivated fasting used to be a regular part of mainstream Irish life. Never quite as widespread or popular as feasting with the general public, religious fasting is still a strong tradition for one community in Ireland. 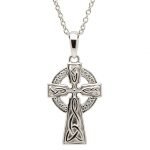 Once upon a time, part of the excitement of St. Patrick’s Day was that it usually fell during Lent.  Irish Catholics were following some strict dietary restrictions for 40 days… and hallelujah, we’d get a break on our patron saint’s feast day.  Meat, alcohol, sugar and dairy products could be on the menu, even if it was a Friday! Catholic Ireland used to have dietary restrictions every Friday in fact.  Fish on Friday sound familiar?  The original idea was not to indulge in tasty salmon but to eat an inexpensive, simple meal as a form of fasting.

St. Patrick’s Day has evolved into a week of partying complete with epic overindulgence. The fish eaten on Friday is more likely to be something picked up at the chipper on the way home from the pub than a humble tuna sandwich with a side order of reflection and prayer.  But religious fasting hasn’t stopped here.  It’s evolved, like everything.  Today, few Catholics fast with the intensity and dedication of their ancestors.  People will give up one particular thing such as alcohol or sweets for Lent.  But one community in Ireland still takes religious fasting seriously; the Irish Muslim community has just embarked on their annual religious fast – Ramadan.

Ramadan is a month-long period of fasting during daylight hours that is one of the Five Pillars of Islam.  (The other four are confession of faith, five daily prayers, alms giving and pilgrimage to Makkah.)  Muslims do not refrain from eating for a solid month of course!  But during Ramadan, those participating do not eat between sunrise and sunset every day.  The fast is broken at sunset with a meal called Iftar, which can be very social and festive (not to mention delicious).  It’s a very holy time for Muslims. It is a time for cultivating self-discipline and spiritual growth.

Ramadan is also a time for spiritual and community development. This year Irish Muslims can enjoy activities ranging from a “Faith-Fasting-Football” evening camp with Iftar and go-karts for teen lads to a research paper writing competition with themes such as “Muslim challenges in the West and how to tackle them” and “Terminating religious extremism”.

Muslim communities in Ireland aren’t exactly new.  Muslims from around the world have been living here in numbers since the 1950s; the Dublin Islamic Society was founded in 1959. This year’s activities show a lot of unity with mainstream Irish culture.  Ramadan coincides with the Euro 2016 football championship and the junior and leaving cert exams.  (That’s a soccer competition and end of the school year testing.)

Of course, as Muslims arrived awareness and understanding grew. Today’s Irish Muslim communities include converts to Islam and families that have roots both here and further afield.

The Catholic church has long had a significant role in Irish public life, but this has never been an exclusively Catholic island.  Two of the most well-known and popular Irish brands – Bewley’s (tea) and Jacob’s (biscuits and crackers) – were named for their Quaker founders.    Records show the Jews visited Ireland as early as 1079.  Details about Jewish families settling here are vague, but in 1555 the village of Youghal in County Cork elected a Jewish mayor.  Ireland’s pre-Christian history is a huge part of our cultural identity, and we have a growing population of atheists.  Our cultural identity is a lot more than our personal beliefs and religion.