If you know where to look, you can find the perfect relationship from your stone and your country. Have you ever considered where you can find this with Ireland and the sapphire?

It’s not so far fetched to make a connection between sapphires and the Republic of Ireland. It just helps to know where to look. For example, since Ireland is surrounded by seas and ocean, it is not that hard to find beautiful, blue water here. Keep in mind, the water in Ireland may not be the kind that you want to jump into, but rather, gaze at from a warm and cozy spot instead.

The coastline along Donegal is quite exquisite and is a very pretty shade of blue. It is also a great example of pristine water that can transform a landscape with unique color. The Cliffs of Moher offers stunning views of the sea as well. This sight is five miles long and is the most visited natural attraction in Ireland to boot.

Traditionally, sapphires are not highly 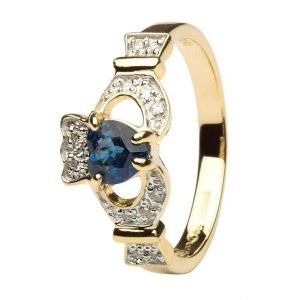 associated with Ireland. Deposits of this gemstone are found in other areas of the world most often. However, that doesn’t mean that the two things cannot correlate. For one instance, the national color of Ireland is tied into blue even though most of use would think that it was green.

Flaitheas Éireann which personified Irish sovereignty wore blue. Historically, crests and flags have included the color blue also. With all of this past evidence, it is sort of amazing that Ireland became more associated with green, when it really was much more rooted in the color blue. And that’s just the tip of the iceberg.

You will find some quaint homes that have been painted blue to match the waters that line the landscape behind them in little villages. Some homes even have blue-painted doors. By far, the place where you will see the most blue is in the waters and the skies.

A great place to get a glimpse of the lovely blue skies is the Marker Hotel in Dublin. Even their interiors are blue! But, if you go to the Marker Hotel, you’ll want to spend some quality time at their Rooftop Bar and Terrace.

The goal of this magical place was to blend in with the natural habitat of Ireland’s Burren. I can attest that I think the Marker did a fantastic job at that. Dates and availability are subject to change depending on the weather and other elements. But, should you have a clear and pleasant night, this is one place you’ll definitely want to escape to in order to find some blue.