It’s not like a miniskirt will do. A neon sign or blinking marquee lights would be socially inappropriate. Too much in-earnest eye contact could actually scare potential candidates away. Rumors, a reputation, a nervous tick – all from trying too hard to present to the world that you’re available.

A Claddagh Ring, of course, could solve this problem. 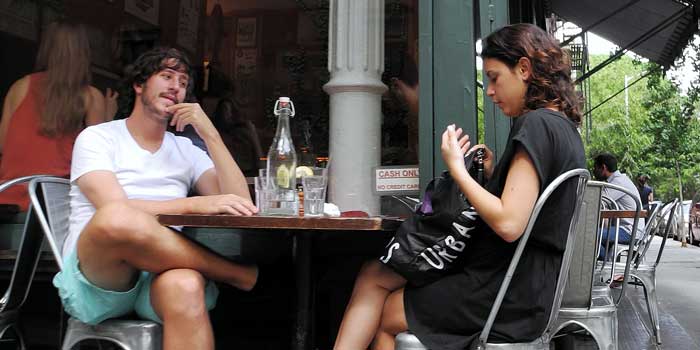 Left hand, heart facing out, and you’re good to go. Not only that, but you’re also saying to the world that you’re keeping it classy. You’re a class act! You could be clad in enough layers (think turtleneck in the summer, sunglasses indoors, pleated pants and tie) to make Diane Keaton jealous, and with just that little ring, faced a certain way, you could disarm a great white. That is, if it wanted to date you. Err…

Like many, you probably grew up associating the Claddagh ring with being cool and being an adult. All it takes is one adult telling you that you can’t wear one until you get older, and woo lah! It’s cool. Parents break down, and by the time you’re in sixth grade, you’ve got your own, even if you had to wear your mother’s. Or your dad’s. Guys wear these, too.

Years later, you’re in between jobs (at least the job of your dreams), extending your three-month subscription to an online dating service to a full year and staring down at a handful of ringed fingers that have nothing to do with Claddagh and thinking, “Why can’t it be that easy?”

At the time and for many hundreds of years before, rings having anything to do with marriage looked similar to the Claddagh: two hands joined or what is formally referred to as a “fede” ring, with “fede” in reference to the latin fides meaning “faith” and then, later, the Italian mani in fede meaning “hands in faith” or “hands in loyalty.”

Jewels, hearts, even inscriptions adorned the bands. Sometimes there were two or three bands, joined into one, with each spouse being represented by a band and then a band for the person wedding the two. This would be called a gimmel ring. Posie rings were the rings engraved with a scrap of poetry or some sort of inscription, and they were also meant to be given to a loved one.

Looking closer, the hands represent what seems obvious: harmony, engagement, union. But more than that, during Roman times, they represented the goddess, Concordia, or “agreement in marriage and society.” Wikipedia goes on to make an interesting distinction with the Greek goddess, Harmonia, who seems to represent something more akin to what’s embodied in music – harmony – than the more sanguine, in-the-flesh “marriage” that’s conveyed by Concordia. 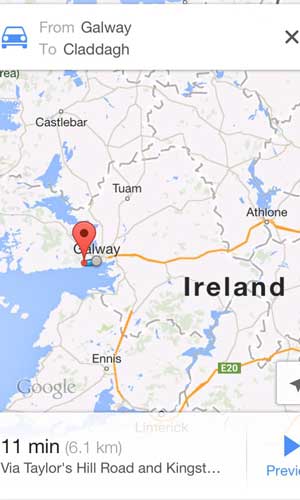 At some point in the mid-to-late 1600s (there’s just too much lore, myth and history to know anything exacting), a jeweler from Claddagh, a fishing village now a part of Galway, changed things up, and in so doing, co-opted the old for the new. Two or three bands became one. The crown would be entirely new as it represented the crown of England and later, of loyalty itself. The heart would be a permanent fixture and the hands would no longer be clasped but coming together only to hold the crowned heart. These seem like simple, design details suggesting an interesting aesthetic. But back then, such changes carried much more force. The consequence, as we now know, is that such force was enough to make this ring now not only synonymous with being Irish but to have lasted all these years to be known, worldwide, as a ring representing the universal virtues of love, loyalty and friendship. All three, then, would make up what we now know as the Claddagh Ring. And yes, there are politically subversive variations out there without the crown, but those rings are known as something different. 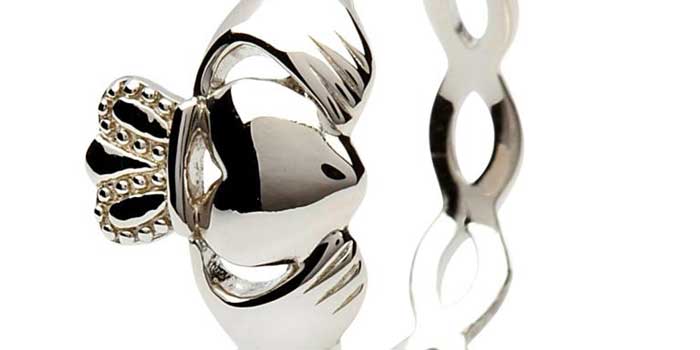 The Silver Claddagh Intertwining Design, hewn in sterling silver, is given a surprisingly delicate quality with the intertwining band. Feeling like an extension of what’s represented and suggested with the hands, the laces harken back to when the hands were once joined on its precursors (the fede rings). It’s a simple, elegant ring representing much history and much room for scrutiny. Especially if you’re single and notice such real estate on a right hand, heart facing out, its lobes and crown facing in toward the real deal.

One thought on “Forget online dating. Try a Claddagh Ring.”