Garlic and a Cross - ShanOre Irish Jewlery
Skip to content

We’ve all heard stories of vampires starting from young ages. Most children are fascinated with tales and no other vampire story is more famous than that of Bram Stoker’s Dracula.

Bram was an Irishman and as a child he suffered from an illness that rendered him unable to walk or stand until he was seven years old. He would eventually overcome this crippling ailment and go on to become a masterful athlete, writer and later create many masterpieces, including Dracula. It is this illness which he credited to his literary excellence years later because it allowed his mind such creative freedom. In this way, his illness allowed his imagination to start a process that eventfully brought him amazing things.

Dracula, as most of us know, is a story set in Transylvania and England during the late 19th century. The preface of the novel involves many different protagonists fighting against the antagonist, Count Dracula, whose goal is to move from Transylvania to England in order to find “new blood” and to kill as many people as possible or turn them into vampires. In the novel, Dracula’s background is quite evil. He comes across as superficially charming and has a degree of finesse, however, upon further inspection many soon realize his only intent is to take prisoners and eventually take their lives. He is presumably a student of black magic in his younger years which translates to the worship of the Devil.

The use of a crucifix as a defense is used most likely because of Dracula’s alignment with the dark side as the cross signifies light and goodness. There is considerable debate that Dracula and vampires were not afraid of crosses, however, they were afraid of God and anything religious which explains why crosses were used in vampire films. It could have been seen as a message of saying the person wearing them were aligned with God and not darkness. 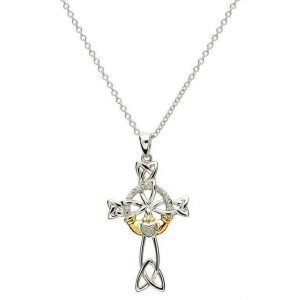 This cross would be a perfect necklace to wear to ward off any evil spirits or dark entities. If you are going somewhere haunted this year for Halloween and want a little added protection, consider wearing a cross like this one. Also, consider getting it blessed.

Dracula is contested by many characters in the novel, at least by those in which he does not consume, turn into vampires or ward away. His archenemy is Dr. Abraham Van Helsing from England who is able to detect what is happening when others aren’t aware what is occurring. Van Helsing helps to defeat the vampires and eventually Dracula. The historical treatment in destruction of their darkness is to stake their hearts, behead them and fill their mouths with garlic.

Today Dracula is commonly listed on top lists of “must read books.” It is applauded for it’s historical reverence, adaptability as well as it’s cult like appeal because it has inspired so many authors and other similarly-themed novels and films. In particular favor for Mr.Stoker was his creation of strong female characters who were just as pivotal to the story as the male heroes.

To see a documentary on the real Count Dracula which inspired Bram’s classic masterpiece, please view this link below.