There once was a demesne that was looking for the perfect building to fit it’s space. What eventually came into that space became known as Newbridge Estate, a Georgian-style home which was erected in 1736 by the then archbishop.

The style of architecture seen in this home is one that makes it quite a treasure. Newbridge is considered to be the epitome of remaining examples of Georgian architecture. The features on this particular house include it’s very simple boxed design two-story frame going two rooms deep once inside the residence. Another classic sign of this time, is the perfect symmetry of the building from left to right and from front to back.

Newbridge has a centered door with two panel windows perfectly located on either side of it and a cornice running the entire length of the door and above both side windows. The estate also has ideal windows that line up in unison both horizontally and vertically and are not placed haphazardly which is very consistent with Georgian architecture. Newbridge also has two chimneys rather than just one seen on the roof.

As most can see from just the front view of Newbridge, it is an ideal example of Georgian architecture. 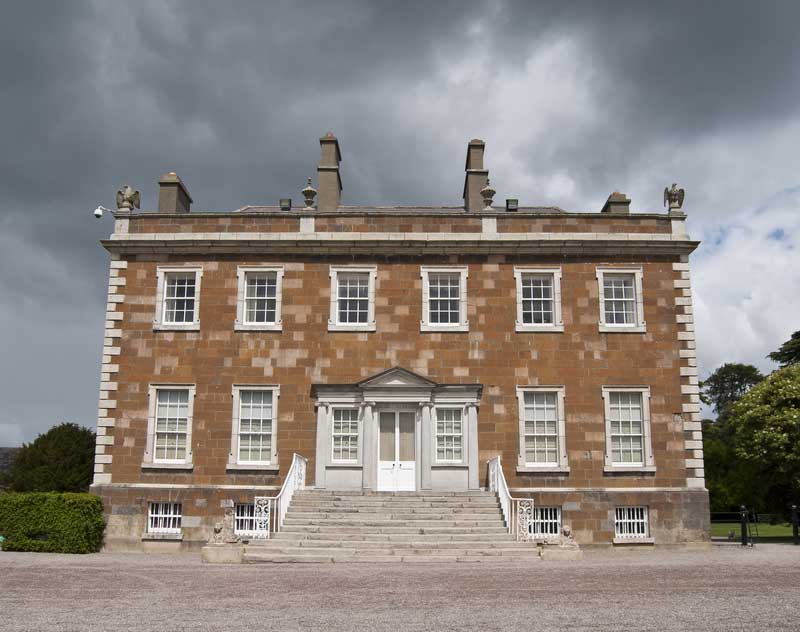 The Cobbe family owned this property from it’s inception in 1736 until 1985 when Fingal County Council took over the home. All said, Newbridge consists of almost one thousand acres of land give or take. One of it’s most interesting aspects is a room known as the Red Drawing Room which is considered one of the finest examples of Georgian interiors. The Cobbe’s also possessed one famous painting of William Shakespeare which is believed to be the only remaining painting of the famous poet and writer. Debates still continue today on the authenticity of the painting, however many still believe it is a very real portrait of the late and great man.

Today the home also has a farm and a demense that can be scoped out while in the vicinity. The farm is home to many different animals including pigs, goats and chickens. Children are encouraged to see the animals up close in their normal habitat. Today’s Newbridge farm prides itself in having a humane facility for it’s animal residents and the treatment of them.The demense has apple orchards, a walled garden and a children’s playground. Weddings are offered at Newbridge, but special arrangements do need to be made in advance as well as for group outings.

The home, farm and demense can be viewed by the public. It is only about ten miles from Dublin, so those in the city are not too far away to come and see this one of a kind estate and it’s grounds. They are open every month of the year pretty consistently from 9 a.m. to 5 p.m. or later in the warmer months. See here for more detail.