Home > Blog > Ireland > Get Tempted by Tourmaline this October

Celebrate October birthdays with bright, brilliant colors to rival the autumn leaves.  October’s birthstone is tourmaline, a charming pink, and the flower is marigold, a joyful orange.  It’s the last month of the Celtic year, leading up to Samhain, aka Halloween. 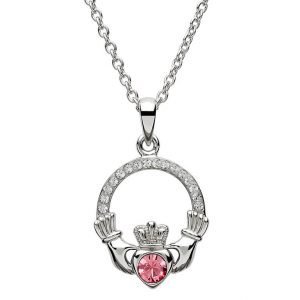 October is a month of glorious color.  It isn’t winter yet.  It’s more of a last hurrah for the year – both the standard calendar year we use today and the ancient Celtic year, which ends on October 31st.  Big names celebrating their birthdays in October include former US president Jimmy Carter (1st), Sigourney Weaver (8th), Hilary Clinton (26th) and Bill Gates (28th).  Beatles icon John Lennon was born on October 9th, 1940, and opera legend Luciano Pavarotti’s birthday was October 12th, 1935. Screen greats Buster Keaton (1895 -1966) and Charlton Heston (1923 – 2008) share a birthday with actress Susan Sarandon on October 4th.

Tourmaline is a crystal, and its color varies greatly depending on its precise composition.  Reddish and pink tourmaline gets its color from manganese.  While it has been found in North and South America, most tourmaline comes from sub-Saharan Africa.  It is also found in parts of Afghanistan, Pakistan and Thailand.

Tourmaline was first discovered in Brazil in the 1500s, but wasn’t recognized as a gem for another few centuries.  Initially, it was mistaken for other gems.  It can come in such a diverse array of colors that it was at times mistaken for emerald or ruby.  Tourmaline came to be recognized as a stunning gem largely due to the efforts of one its early fans, a gemologist who worked for Tiffany’s George Kunz.

Another early fan was Empress Dowager Tz’u Hsi of China.  She was passionate about pink and red tourmaline, and was another driving force behind the gem’s growing popularity.  Critics would say she was fond of jewelry (and political power) to a fault.  Let’s just say she knew what she wanted and didn’t hesitate to go for it.  Leaving aside the politics of her decades ruling China, she clearly had an appreciation for beauty.

China’s Summer Palace was built as her retirement home, although she didn’t really retire.   She just shifted to running things from behind the scenes. The last empress of China has been the subject of books by Pearl S. Buck and Anchee Min.  In addition to her love of jewelry, particularly tourmaline, the empress was fond of dogs and flowers.

If you are giving the empress in your life a gift of tourmaline jewelry, perhaps a birthstone Claddagh ring or a Celtic pendant, why not include a bright bouquet of marigolds?  Marigo lds are the birth flower for October.  Who doesn’t appreciate the bright cheer of pink tourmaline and the golden glory of marigolds as we head into the darkest part of the year?