Have you ever noticed how often the number three features in all things Irish?  Yes, we have 40 shades of green and the four ancient provinces of Leinster, Ulster, Munster and Connaught are known as the four green fields, but three is much bigger than that.  Three pops up again and again and again.  The shamrock’s three leaves.  The Newgrange Triple Spiral.  The Claddagh symbol’s three elements: heart, hands and crown.  And of course the most famous use of three – the Trinity Knot. 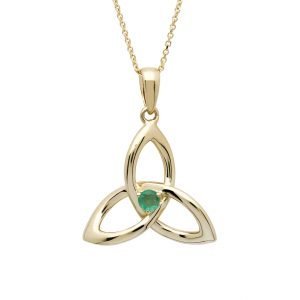 The Trinity Knot is also known as the Triquetra, and its exact history and origin are shrouded in the mists of time.  In other words, there are a few theories and no one who was around when it was first used is available today to discuss it.  But those theories are pretty intriguing.  The Trinity Knot does not have one singular and specific meaning.  It’s symbolism if more like multiples of three.

Early Christian monks in Ireland were certainly fond of the Trinity Knot and used it represent the Holy Trinity – the Father, the Son and the Holy Spirit.  It was used in the Book of Kells and can be seen on Celtic crosses.  No one could deny its power or popularity as a Christian symbol.  But its roots go back further than that.

The Triquetra is believed by many to go back to pre-Christian times, which makes sense because other symbols invoking three elements such as the Newgrange Triple Spiral very clearly reach back to before Christianity’s arrival on these shores.  Also, pagan Ireland’s beliefs involved many uses of three.  Morrigan and Brighid were described as triple goddesses. (Morrigan is associated with the Ulster Cycle and is often depicted as three sisters; Brighid is the star of too many legends and tales to list.  She was astonishingly busy, even for three goddesses.) 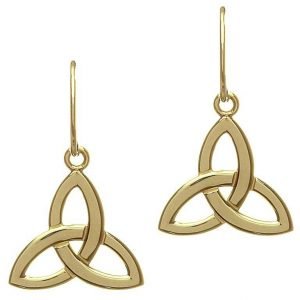 Modern interpretations of this classic knot have a spiritual element as well, whether it is viewed as a pagan symbol of the more general triple aspect of a female divine being such as the maiden, the mother and the crone, or a more earth-focused understanding such as land, sky and sea.  It has even been used by some to represent the mind, body and spirit.   Given its rich history, the Trinity Knot is a remarkably flexible symbol, which makes it widely loved.

Whatever your belief system, the Trinity Knot has an undeniable visual appeal and is a stunning design for a pendant or a pair of earrings.  Some knot work is incredibly detailed and complex, but the beauty of the Trinity Knot is its simplicity.  It doesn’t look like a maze.  Its clean lines draw the eye along, tracing its infinite curves.  It is also a captivating design when repeated across a bracelet or ring.  The Triquetra design stretches from Ireland’s ancient past weaving its way through our most beloved art including the Book of Kells to the unknowable future, adapting to our evolving understanding of ourselves and our spirituality.