Most tourists visiting Dublin make a point of strolling over this gorgeous iron pedestrian bridge spanning the River Liffey, and many Dubliners cross back and forth over it daily.  It is estimated that an average of 30,000 people use the Ha’Penny Bridge every day.

The iron arches topped with lamps give a romantic, cozy charm, and it has become a popular spot for couples to leave love locks, much to the city council’s annoyance.  (The popular fad is not unique to this Dublin bridge; it has been annoying city maintenance crews across Europe since the release of Frederico Moccia’s 2006 novel I Want You describing the practice.)  For tourists and locals alike, the Ha’Penny Bridge is an icon of Dublin. 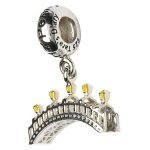 It was built in 1816 by William Walsh, a Dublin alderman who ran decrepit ferry service across the Liffey at that point.  His ferries became so run down that despite his alderman status, he was asked to either repair them or build a bridge to replace them.  Many generations of Dubliners are grateful he chose the latter and provided a bridge so vastly superior to his creaky old ferry.

To make up for the loss of his ferry fares, he was allowed to charge a toll to cross the bridge in either direction. No rewards for guessing the amount of the toll! Dubliners loved the bridge immediately because for the most part pedestrians had to make their way through streets crowded with ponies pulling carts, carriages pulled by horses, draft horses pulling larger wagons and bicyclists, not to mention the mess left on the streets by all those horses. The Ha’Penny Bridge was and still is exclusively for pedestrians.

When the bridge was first built, it was dubbed the Wellington Bridge.  In 1922, it was one of many locations around Ireland to receive a new name and became the Liffey Bridge, which is still its official name.  It has at times been known as the Iron Bridge, the Steel Bridge, and the Triangle Bridge, but really for most people crossing it through the generations it has always been the Ha’Penny Bridge. 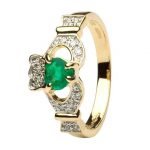 The Ha’Penny Bridge was renovated in 2001 and restored to its original white color.  Nearly all of the original railings, some 85%, were able to be refurbished and kept as part of the beloved bridge.  In recent years, the bridge has become a popular spot for couples to put love locks, but local government is feeling anything but love about the idea.

The bridge is a protected structure, and the padlocks rust and damage the iron where they’ve been locked.  While the idea of a couple putting their initials on a padlock, affixing it on a bridge and throwing away the key is terribly romantic, it really is terrible for the bridge.  A nice engagement ring will cost more than a padlock from the hardware store, but really, it isn’t likely to be cut off by the city government and thrown away.