Traveling to Ireland is a fantasy for many and the reasons why can seem pretty evident. For history buffs, Ireland is coated in historic relics from shore to shore. It almost serves an absolute certainty that wherever you stay, the lodging will most likely be one that has been there for many years before your time.

Why not take the time to research the places where you could stay then? There are many options available as it is also a guarantee that the historic inns and homes available will be aplenty.

To continue on the historic home a week that we have been covering, this week’s unearthing is summed up in one word: fancy. The Ennistymon House of County Clare has been in Ireland for centuries. It is unclear exactly who built the properties that constituted the original site of this land as record did not show an actual birth on the estate or ownership. However, speculation was made that it was a former governor of County Clare. 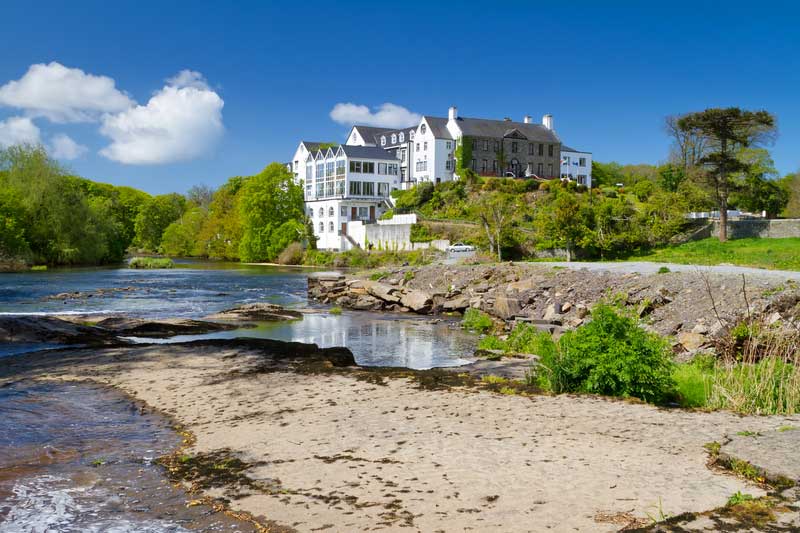 What is known is that in 1564 the land was received by a family by the name of the O’Briens. Interesting enough, Ennistymon earned the name of “middle house” because it happened to be situated between two other castles that were also owned by the O’Brien family.

The town of Ennistymon gets it’s name from “Inis Diamann” which means Diamann’s River and Meadow. This translates to the location of the town being roughly two miles inland from the Atlantic and also because of the Cullenagh River. For the Ennistymon House, many believed that at one point the castle was once surrounded by water. It’s placement is such that it is seen on a hill and it would seem that it’s being built on an island might have made sense at a prior time. However, for whatever reason the rivers or streams that surrounded it dried up or found a new course and now the castle is no longer on an island, but still sits atop a propped up piece of land.

The ownership of Ennistymon is a familiar story as it was passed down multiple times throughout it’s long history. In the early 1700’s, it was passed down to an ancestor of the original owners who in turn demolished much of the main realty. The house passed hands many times to relatives in the O’Brien clan, but it wasn’t until the late 1800’s that additions were added back to the property after the demolition of the early eighteenth century. At this point, the house was passed to an in-law and would stay on this course.

World strife with wars did not show much progress for the premises until one of the owners decided to turn the house into the Falls Hotel in the 20th century. By 1955, additional resources were added to encourage growth of the property so that it would flourish and eventually the Falls Hotel was sold to the current owners in the 1980’s and they have continued to improve it.

Today what started out as a castle on a probable island that dried out is now a grande hotel and spa known as the Falls Hotel and Spa. The current hotel features 140 luxurious rooms varying in size and for different accommodations. The hotel boasts three different venues for dining; the Dylan Thomas Bar, the Cascades Restaurant and the Thai River Restaurant. For activities, the Falls Hotel offers surfing, kayaking, golf, fishing, and cruises. They have an amazing spa menu for adults to partake in while kids can partake in any number of activities. Falls Hotel also offer weddings and meetings.

Watch here for views of the amazing spa and tune in for more history next week.