Before the Claddagh - ShanOre Irish Jewlery
Skip to content

The romantic story of how an enslaved Irish fisherman crafted the first Claddagh ring for his beloved is well known, but where did he get the idea for the design?  The ring has roots that go deeper than one man’s artistry and devotion.

The Claddagh design first used on a ring but now seen on many items has a romantic history.  We know that Richard Joyce, a Galway fisherman, was captured at sea and enslaved.  While in service to a goldsmith, he designed the iconic Claddagh ring for the woman he loved in Galway.  No doubt he had time to think a lot about the design in the time he was enslaved, but few people today know that he did not come up with the design entirely on his own.

A similar style of ring with hands was popular in Europe before Joyce created his design.  And that ring was a blend of two earlier styles.  The roots of the Claddagh ring run deep, and for centuries, these similar designs have been used as wedding rings. 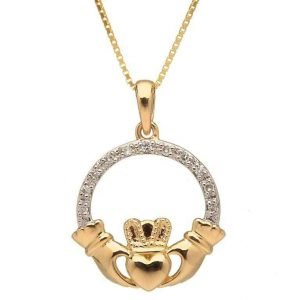 Inspiration for the First Claddagh Ring 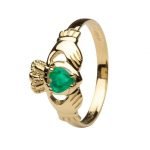 Gimmal rings date back to the 1200s and could be described as the forerunner of the puzzle ring.  This design featured two interlocking rings and could incorporate gemstones or not.  It was used as a wedding ring and also given as a token of committed friendship.  Martin Luther gave a gimmal ring to his bride when they wed in 1525, and Henry III of England gave one encrusted with gems to a count in 1202.  A gimmal ring dating back to 1350 is part of the collection of the Victoria and Albert Museum in London.

The fede ring, a design of two interlocked hands representing love and friendship, goes back to ancient Rome.  It was very popular during the Medieval period. Fede rings sometimes featured a heart as well as the two hands.  Over time, jewelers began to combine the two designs as tools became more sophisticated and they had the means to make more creative and elaborate pieces.  They also began to engrave messages on the rings, especially wedding rings, usually the couple’s names or a Bible quote about marriage. 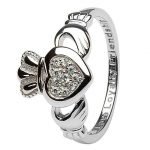 When Joyce was bound to a jeweler, no doubt he learned these designs when he was trained as a goldsmith.  He probably made many of them with many variations, eventually becoming inspired to create a new design of his own.  Imagine his agony at being so abruptly and harshly separated from the woman he loved and then spending years making wedding rings for others – all the while wondering if she was alright, if she had married another or if she was waiting.  He worked every day with designs of hands and hearts signifying love and friendship, and probably loyalty was the thing that consumed his thoughts. 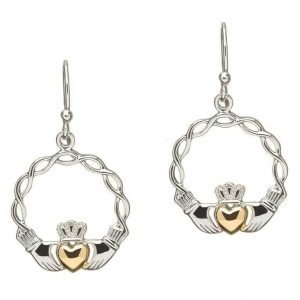 The art of jewelry design is always evolving.  While the plain gold or silver Claddagh ring is a classic, the Claddagh design is now used for earrings and pendants too.  Just like Richard Joyce before them, jewelers today draw inspiration from existing symbols and designs to create new variations in the timeless pursuit of representing beautiful feelings with gold, silver and dazzling gems.