Today (22 June) a United Nations committee that has reviewed Ireland’s compliance with the U.N. Covenant on Economic, Social and Cultural Rights has recommended that Ireland amend its abortion laws (among others). 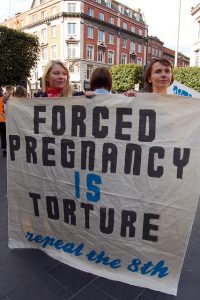 Currently, abortion is illegal in Ireland unless the pregnant woman’s (or girl’s) life is at risk.  It’s illegal in cases of fetal abnormalities, rape and incest.  Irishwomen who need or choose to terminate their pregnancies must do so abroad.  Many typically travel to the U.K., which is close by, but with this system in place, women who can’t afford the trip, the time away from work, etc. for this procedure are put at a huge disadvantage.  By not having access to safe abortion facilities, they are being forced to either have children they can’t care for/ didn’t plan to have, or to attempt terminating the pregnancy themselves through medically unsafe and even life-threatening measures.

The committee advocates for a referendum repealing the part of the Constitution that protects the “right to life” of the pregnant woman and fetus equally. The members also want revision and clarification of the language in the 2013 Protection of Life During Pregnancy Act with regards to what constitutes a threat to the pregnant person’s life.

Sadly this is not the first time the U.N. has criticized the Irish government for its failure to implement changes to laws governing this issue.  And I imagine it won’t be the last.  But hopefully, now that the U.N. has once again called for these reforms, the dialogue surrounding abortion legalization in Ireland will be reinvigorated, and people will start talking about this issue more as referenda are prepared.