When most people think of mining in Ireland, they think of coal. Locals and tourists alike might think of the Agrina mines in County Roscommon, where first iron and later coal were mined.  But that might be on the verge of changing.

Recent detailed exploration has discovered something much shinier and prettier than iron or coal in the border region.  Gold. Yes, really.

The years of painstaking exploration that a few determined people have spent searching for gold have been rewarded with some serious finds. The doubters and naysayers who have smirked at the idea of gold being found in Ireland have little to say now.  The Irish Times recently quoted Professor Patrick Conroy, a leading force in the search for gold in Ireland’s border counties, as estimating that 50,000 ounces of gold per year could be mined, which could be worth 70 million euros although the cost of getting the gold from below the ground and processing it to create the shiny metal the world loves could cost about half of the gold’s value. 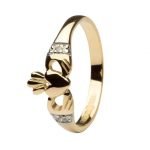 Ireland is known and celebrated around the world for creating beautiful designs throughout history that translate well to gold and silver jewelry alike.  We even have a famous goldsmith in Richard Joyce, the man who was captured by pirates, sold into slavery and returned to Galway a trained goldsmith having crafted the beloved Claddagh ring design while in servitude.  But now, it looks like we might have the actual gold as well. 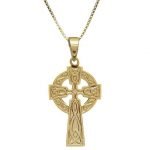 It is early days, and you won’t be seeing jewelry made of Irish gold available for sale any time soon.  But a handful of companies in the Republic of Ireland and Northern Ireland are wending their way through the process of applying for permits to begin mining operations.  With the paperwork involved, no one is likely to dub this a gold rush.  Gold ore has been found in counties Cavan, Monagh, Armagh, Donegal and Sligo.  This region is known as the border counties as it runs along the border between the Republic of Ireland and Northern Ireland.  It has never been a prosperous area, but that could be about to change.  Experts have estimated that if the applications for permits to mine are approved without any major delays, mining could begin as early as 2016.

Ireland has been producing stunning metal work and jewelry since the Bronze and Iron Ages, and in fact, there is evidence to suggest that gold was being mined in Ireland as far back as 1600 BC.  Gold Irish jewelry has been enormously popular throughout the ages as styles and fashions have changed.  It is far too early to predict how these discoveries will pan out, but it seems very likely that it could bring real change to local communities and to the world of Irish jewelry.  Right now, the futures looks absolutely sparkly. It could even inspire the next generation of Irish jewelry designers.