Most of us have heard of A Christmas Carol by Charles Dickens. This is the classic story that revolves around Ebenezer Scrooge and his visits from the three ghosts of Christmas. Ireland has its own version of A Christmas Carol that some people have read and consider it their principal Christmas tale.

The book is no other than The Dead by the Irish writer James Joyce. Joyce’s works were considered groundbreaking at the time when he wrote them. Some of his most famous works included Dubliners, A Portrait of the Artist as a Young Man, and Ulysses.

The Dead was the final installation in Joyce’s collection of Dubliners. The story is much like A Christmas Carol when a man is confronted almost suddenly with his life, the reality of it, and what his options are. The main character is Gabriel Conroy who is a married man about to set out for a night at a party, presumably for the Feast of the Epiphany.

The feast which takes place in January makes this story the perfect parallel to A Christmas Carol where we are found engaging in the same types of activities and also we are confronted with the same realities. Gabriel has some issues of his own, but the one that seems to cause him the most amount of ill-ease is how little he knows of his wife’s past.

An endless symbol of love is a band such as this; Celtic Trinity Knot Diamond Set 14k White Gold Wedding Ring. The ring is a superb representation of a love that is meaningful with the trinity knots depicting a true grounding in something concrete and firm. 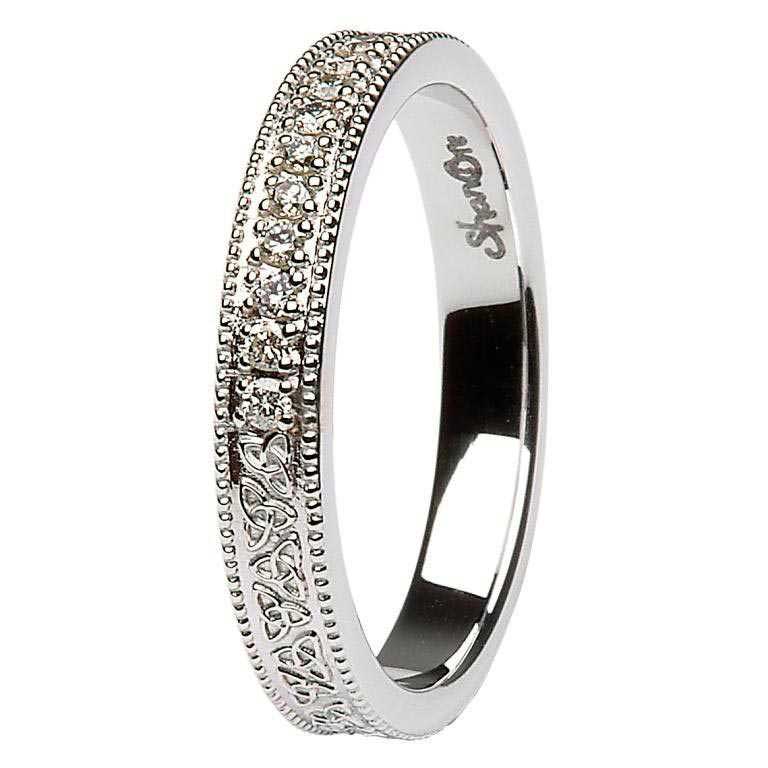 Gabriel and his wife go to the party and through his awkward attempts to mask his feelings along with his wife’s confused responses, it seems that Gabriel is on some sort of mystical journey. He makes it through the party through a few bungled attempts at being socially at ease with others when he barely recognizes his wife standing near a staircase. His reaction is of surprise that it is her and he feels a longing for her that is not common in marriage. When they finally get time alone and Gabriel tells his wife his feelings, she is not moved by him.

She explains that what she was feeling at that moment when he was so captivated by her was a bit of nostalgia for a lover who is now past. She loved this man terribly, but because he was ill they were separated. Somehow, the man still managed to make it to her home through the rain and in his misery to see her before he died.

Upon this realization, Gabriel feels not much more secure about his relationship with his wife, but more invalidation. He then begins to question what it is he wants in his life and weighs heavily the costs of every mistake he makes adding more pressure and burden to his already sad existence.

This tale is one that leaves a man with a bit of a need to reflect and wonder what it is he wants to do with his life and how hard he is willing to stay on his familiar path knowing all that he does. A story like this is poignant for most people during the holiday season as most people have families or jobs or something that takes a great deal of time and energy from them. It gives us all a chance to wonder,”what is it in this lifetime that is really worth it?” “What is it in this life that makes life worth living?” Ultimately, as Joyce must have innately known, it is that search and claiming of whatever it is for every individual that is what truly makes life worth living.