You are not alone if you see the color green and automatically think of Ireland. What if I told you that this assumption was learned?

I was recently watching a movie 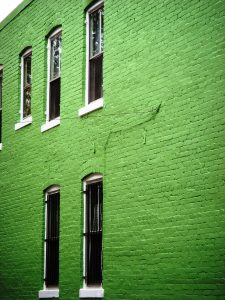 preview that took place in Ireland. There was a couple who came to visit and there was a woman who represented the hotel where the foreigners would be staying. She had red hair and an unmistakable, rich accent. My friend looked at me and said, “they’re doing that for our benefit.” I nodded because I knew what he meant.

Red hair is a common Irish stereotype that most of us readily accept. When we see a representative of Ireland who has red hair it makes sense to us because that is what we have been taught to associate with Ireland. But, did you know that this goes much further than hair color?

The color most frequently associated with the republic, green, is not even the national color of Ireland. This may surprise many people because when we think of Ireland we think of green and for good reasons. It is in fact royal blue that has long since been the correct hue for Ireland. Yet, how would we know that? Based on everything we’ve seen and heard, we see the color green paired with most things that are Irish.

Green really gets it’s link from Irish Catholics and Christianity while St. Patrick is associated with blue. There is even a St. Patrick’s blue color. It was utilized in ancient, Irish flags as a backdrop to a gold harp. In more recent times, Johnny Cash wrote a song about his ardor for Ireland. In it he coined the idea that Ireland had forty shades of green.

There are some very good ties to the color green, so Ireland is not what I would say unlucky for having this relationship. Green symbolizes nature, wealth and balance. It is believed that people who wear this color exude a calmness and even a show of mastery over themselves.

On a deeper level, green is associated with the heart chakra. This area is located in the center of the chest near the sternum.  Heart chakras symbolize the ability to love others and the degree in which people express that love. People who lose themselves in relationships might be said to need help in this area while others who are able to love while keeping true to themselves are seen to have strong heart chakras. I think either one can wear this color and it likely wouldn’t hurt.