People who live in Ireland speak Irish as well as the English language in rare cases. This was not always the condition. Centuries ago Irish was the predominant if not only language there was in Ireland and things were much different than they are today,

When you hear people speak in Ireland, even when speaking English, they do not sound like people in the United States or even Great Britain do when they speak. They have a specific way of talking that has developed over a long period of time that has formed into a unique dialect which is what we have come to understand as an Irish accent. This has trickled down from what started out as pure 100% Irish language. Then it transformed into people who spoke Irish at home but spoke primarily English outside of the home. This is how a dialect is born. 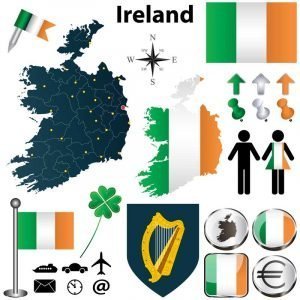 What is so wonderful for those who travel to Ireland is that they do not need to worry about learning a new language like Irish because there are so many English speaking people in Ireland as well as those who speak Irish. Technically, Irish and English are both the official languages which makes travel much more convenient for outsiders. Another exciting thing about the language aspect for traveling patrons is that travelers can enjoy listening to the accent of the Irish people that they will meet and hear the unique way that they pronounce words and perhaps learn strange and new names that they have for everyday ordinary objects.

For most of recorded history until recently, Irish was the most popular language spoken in the country. In the seventeenth century, Elizabethan powers did not approve of Irish language which caused a shift in it’s popularity. They were concerned that the spread of English domination would be diminished with the continued use of the Irish language. By the late nineteenth century, the effect was noticeable and many people were no longer speaking Irish and instead opting for the English language, which is what the Elizabethans had desired.

There are some terms that would be fun to come across when travelling in Ireland. For example, besides being a brand of beer, Guinness actually means in Irish terms “black stuff.” This would explain the dark color of the popular beverage. If you were to hear someone call someone a “Dub” that would be sign of praise or calling them a Dubliner. If someone is “throwing shapes” they are showing off and if they are in “The Pale” that would be anywhere inside the Dublin region.

Unfortunately, when the British rule ended in Ireland they left very few Irish speaking citizens in the republic. There have been great efforts made to preserve whatever Irish speakers remain in the country and to enhance opportunities to promote the language with what few people are left speaking it. If you do get to visit Ireland be grateful if you do run across someone who shares some words of Irish with you and take the time to hear them speak.