Killarney House was a vision and quite a good one. The landscape surrounding the area was such a treasure that the then Earl of Kenmare decided to build a large property in the vicinity of Lough Leane. The result would be Killarney House.

Lough Leane stands for ” the lake of learning” and is the largest of the three lakes of Killarney. It is believed that this meaning stems from Innisfallen Island in the center of the lake. This island was the home to an ancient abbey of monks dating back to 640 AD. The monastery was founded by a leper and their greatest achievement would be the documentation of Irish history over the course of hundreds of years spanning through the medieval period. This collection is more commonly known as the Annals of Innisfallen which are now protected at Oxford. Today it is possible to visit the island in the summer months. See here for information on how to book a trip to the island. 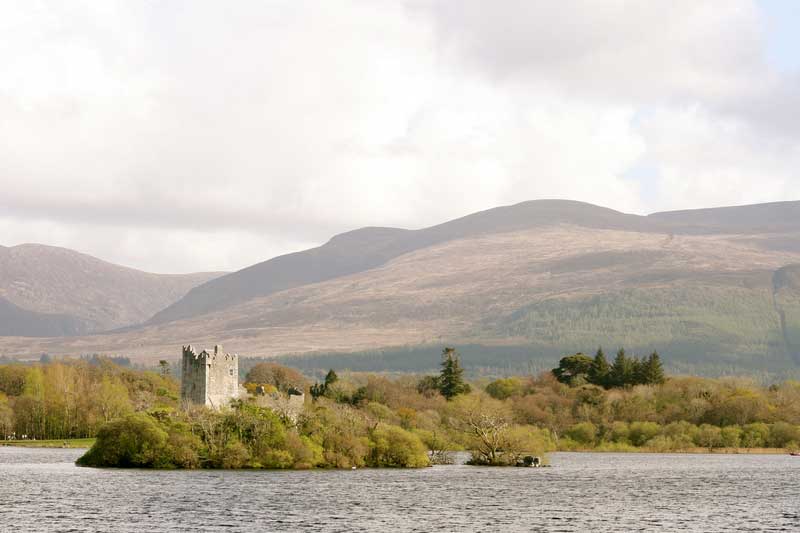 The house itself was a prized pick because back in the 1860’s, Queen Victoria selected the home as her residence while staying in Ireland for a visit. This put Killarney House on the map. Killarney also has the distinction of being home of the Earls of Kenmare. Once these honoraries were seated at the Kenmare House specifically. However, that home was demolished and since has been in uncertain status. Recently, a spokesperson has mentioned renovations for the formerly stately manner, but that may take time.

Killarney came to life after the demolition of the old estate of Kenmare because it was believed that they wanted a property on a more elevated piece of land. At the time, the cost of the building was very pricey.

The home was built with Jacobethan-architectural style. The characteristics of this form of architecture are Tudor-styled aches, steep roofs, carved brick detailing, high chimneys, a contrasted lighter stone trim around doors and windows as opposed to the main brick color and pillar supported porches to name several attributes. At it’s height, it was considered one of the finest mansions in Ireland however, it did not adjust very well to it’s environment. It had two fires and eventually another property was built in it’s area entitled Knockreer House. Eventually, a second Killarney House was built in the 1950’s and that was finally sold to the Irish state.

Today visitors can see everything that has to be offered at Killarney National Park. Knockreer and Killarney House Gardens are part of the package and it is definitely worth a visit to see this beautiful park and all it’s surroundings. Click here for more details on the park and all of it’s extensions.