Summer is still hanging on and one of the hottest months is August. This is a wonderful month for surf and sunshine and to enjoy the lasting days of the summer season. For those with birthdays in the month of August, you have a choice in gemstones.

Peridot is the first gemstone for August birthdays. It is a green gemstone and has sometimes been known to cause confusion between itself and the emerald. What is fascinating about this peridot is that it mainly comes from palasite meteorites. These specific types of meteorites are very rare indeed so suffice it to say that if you ever find yourself in possession of one of these gems then consider yourself very lucky.

Of some of it’s characteristics, this gem is said to offer magical powers to those who wear it. The peridot is a common gem that Hawaiians talk of as being brought forth from their volcanoes. The natives claim that the gems are the tears of Pele who is the goddess of fire and volcanoes. Add to this claim which also substantiates that peridot comes from meteorites since they often impact the earth deep in the core and would only resurface say after a volcano erupted.

The second choice for August babies is the Onyx which many people are familiar with and for August that would most specifically be the Sardonyx.  Most people know onyx stones by their bands. For the Sardonyx, the particular colors are reddish, brown and white colors. What is truly historic about the Sardonyx is that the Greeks and Romans had tailor-made talismans made battle-ready inscribed with their favorite warrior heroes on them. These ancients believed the stone would bring them the ultimate victory in war. In the more modern era however, the Sardonyx has been used more so in cameo and intaglio jewelry.

For the August birthdays we have our own version with our August Claddagh ring. It features our very own style of peridot stone surrounded by a sterling silver band and our three features of the claddagh ring which are love, loyalty and friendship or hands, a heart and a crown. 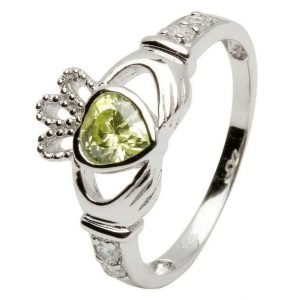 We also have the August claddagh pendant which also features our own style of the peridot stone and is too surrounded in sterling silver. This piece also has the same three classic symbols of the Claddagh and represents the same as our feature ring. 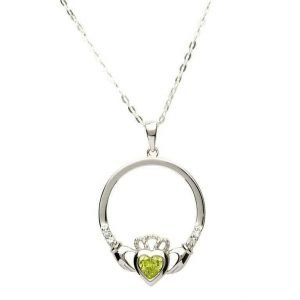 If you are still looking for the finishing touches for these wonderful pieces of jewelry than the best way to perfect the August birthday with an added bonus would be with August’s birth flower which is the gladiolus. So might I suggest, that you grab a bunch of gladiolus for your loved one for this month and also don’t forget a claddagh piece and it will be a birthday they will be sure to never forget!