If you’ve been following ShanOre, then you’ve seen the last few months I’ve written a piece on the Claddagh birthstone rings. Well, December is no different except those with December birthdays get to share their birthday month with Christmas and New Year’s Eve so I really feel for the December birthdays out there.

Every month is special and that is why every month has a special stone with special colors and even a birth month flower. I for one just love the deep purple-blue hue of the December birthstone. To me that almost signifies the month of December itself. When I imagine cold icicles forming outside on windows, lakes and rivers, this is an automatic color that I envision. It is breathtaking when worn on someone in clothing and especially in a jewel.

The birthstone is Tanzanite which was found in where else, but Tanzania. Another birthstone for December babies is Zircon which comes in a wide array of colors as well. There are many great properties to the Zircon stone including protection from illness, nightmares, and to stimulate appetite. We also have Turquoise for those born in this month. This stone has a very long history from ancient Indians and is known to have strong healing powers as well as providing balance to those who wear it.

As you an see in our Claddagh Birthstone Ring December, our gemstone most closely represents the colors of Zircon and Tanzanite. The Claddagh has our three eternal elements signifying love, loyalty and friendship with the crown, hands and heart. 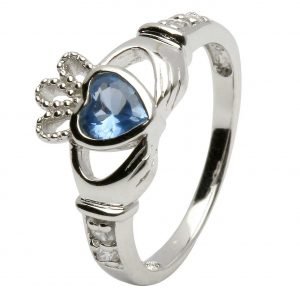 For those who don’t want a birthstone ring per se, but fancy a pendant then definitely take a look at the Claddagh Birthstone Pendant December.  This has all of the elegance of a ring however it is ever so delicately hanging on a pendant. 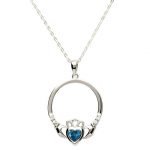 Lastly, for December babies, your birth flower is Narcissus which represents respect, modesty and faithfulness. Ironically those are very similar features to our Claddagh rings. It is interesting to note the origin of the birth flower for December because it originated in the Victorian era when it was considered malapropos to express open affection when a good event happened, such as one’s birth or romantic attraction for another. Therefore, people would send flowers instead. A common gift for a baby born in December or other celebration in Victorian times would have been turquoise or this classic white flower.

Luckily, times have changed and it is more acceptable to say and show what you feel openly these days. What better way than to show the December babies out their how much you care then with a classic birthstone piece from ShanOre and perhaps a few Narcissus on the side.