It’s summertime and a great new month has started: July. This month ironically is named after Julius Caesar probably because he was born in July. July became an official month in 46 BC when the Roman calendar was started. For those of you who like your World History, you will remember that it was a man named Brutas who took part in killing Julius Caesar along with nearly sixty other men during the Ides of March conflict.

Also for anyone who may be unfamiliar with the birthstone of July, it is the very red Ruby. The color of a ruby will depend and can be deep crimson or purple to pale rose. The ruby has an amazing history starting with nobility. Ancient customs believed that this stone possessed a form of virtue and the ruby was seen as more valuable than a diamond for those earlier times based on those strongly felt beliefs. People held such strong convictions about this stone such as it bringing them protection and passion, wealth and even thought that if the stone were tossed into a body of water that it would boil the water. They also thought that the ruby could make wax melt if pressed against a piece. These prophesies were based on the ruby being a symbol of the sun and somehow containing it’s radiant heat.

It is no wonder that today people now attribute wearing the ruby to a person who would have much strength and self-confidence. Anyone who would don a piece of sun around their neck or finger would obviously be emitting this type of energy! The ruby demonstrates power, courage and awareness. For those people born in July, this stone is one that will definitely not go unnoticed by any stretch of imagination. 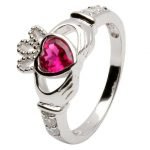 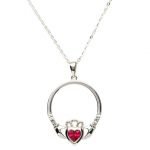 For an added bonus, July like every month has a birth flower. Most people like flowers and it would be a nice gift for those in this month to receive a bouquet along with their claddagh ring or necklace. Theirs is the larkspur which is a gorgeous purple flower. Historically, this flower has been used in the treatment of wounds. Larkspur is also said to have been used to keep away spirits and ghosts for those who were more superstitious.

July has many interesting attributes. It has a wonderful flower and an amazing birthstone. It was also named after Julius Caesar. His memory serves to represent this seventh calendar month and today we try to represent July with more pleasant things. Unfortunately, the legacy with which Caesar left was not so remarkable because he destroyed so many people. It would have been nice to have named a calender month after someone more positive. So, for July we’ll try and focus on the Larkspur and Ruby instead.