June the month that welcomes in the season of summer has finally arrived. Those who are blessed to have birthdays during June have their choice of stones because this month has three different official birthstones.

The first birthstone known of the June babies is the pearl. Pearls are traditionally found when shucking oysters. They are a treasure coveted across the world. How we came across the pearl was probably by accident when scavenging for food. They have been around for eons however. References to the pearl date back to mythical times. Those who were most noble and of eminence wore them in every region of the world. We have some amazing pieces to choose from in a different piece written on pearls here.

Another choice for June babies is alexandrite. This stone was first discovered in Russia in the 1800’s. The stone got it’s name from the then Czar of Russia Alex II. The stone is unique because of it’s two diametric colors. True alexandrite appears green during the day and under fluorescent light, however, it changes hues to a purple when under an incandescent light. It can truly look like a completely different stone. The alexandrite was also said to have taken it’s color resemblance from the Russian flag when it was first discovered. Here in our sterling silver claddagh ring we have the June birthstone placed in the center of the three components of the claddagh, Those are the heart, hands and a crown which symbolize love, friendship and loyalty. 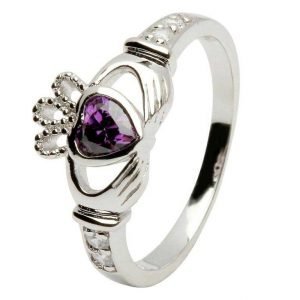 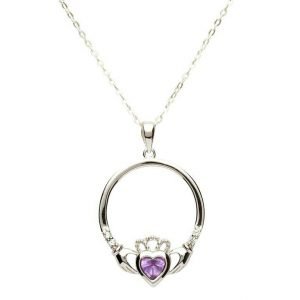 The final birthstone for the month of June is moonstone. Moonstones hold a long history of lore and spirituality with them. For starters, in the beginning people believed that these stones were actually formed by the moon and it’s rays. With this came much myth about whether or not you could see your future with a moonstone. Either way, it was still regarded as a sacred stone by most. The general feeling from this stone is good vibrations, healing and hope. From all of the research and history on moonstones gathered, positive feeling is strongly associated with the moonstone.

Once you have decided on  the right stone, make sure you come in with the right flower for June. This month it is the rose. The rose is one of the most pleasantly fragrant of all the flowers and one of the most lovely to look at. It does have a down side with it’s thorns and legend says that the thorns were because of Cupid’s arrow hitting a rose garden by mistake and therefore this divine flower developed these prickly extensions. Trust the advice here and pick a nice bouquet of roses and a beautiful birthstone piece and make the June birthday one she’ll never forget.