The time is nearing spring and we find ourselves burrowed in the third month of the year. March has the luxury of being the month to bring in this new season and thus we have a new time to discuss it’s birthstones and flower.

The first of March’s birthstones and the one in which we feature on our Claddagh Birthstone Ring for March is aquamarine. Aquamarine is from two Latin words one which is aqua meaning “water” and the other marina which means “the sea.” Not only does this help to describe the cool sea-like color of this popular gemstone, but it also help to explain an old myth that aquamarine was used to help protect sailors and guide them on a safe trip across the seas.

Our Claddagh ring features the crown, heart and hands which signify love, loyalty and friendship. We also have the Claddagh Birthstone Pendant for March for those who prefer a necklace. This has the same look and aspects of the Claddagh ring and both make great gifts for March birthdays. 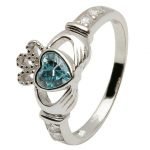 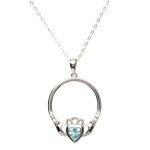 Some possible affects of wearing aquamarine are attracting new friendships, cooling tempers, and keeping a level head in times of stress or difficulty. This can be attributed to the gemstone’s placid color. Other possible health benefits of wearing this stone are aiding the liver, stomach, teeth, eyes, and ears. Aquamarine is also known for releasing fear, calming nerves, and bringing mental clarity. Oftentimes, the gem will appear pale, but aquamarine can be found in deeper mixes of blue and green.  Today aquamarine is mainly mined in Brazil, however, countries like Pakistan, Nigeria, and Mozambique have some supplies as well.

The second birthstone for March is the bloodstone. This rock is dark-green with pieces of red throughout that have erupted because of iron oxide deposits. In ancient times Babylonians believed that the bloodstone had special healing powers most specifically for disorders of the blood. They would make special amulets to wear in order to combat disease. Legend also said that bloodstone was referred to as a martyr’s stone because it was believed that drops of Christ’s blood had fallen onto a piece of jasper at the foot of the cross while he was being crucified. Today bloodstone can be found in Brazil, India and Australia.

For those of your out there wanting to celebrate the beginning of spring the proper way, start off by giving those with a March birthday their birthday flower of daffodils. This flower means unequaled love or in other words you cannot tell them how much you love them in just words alone. 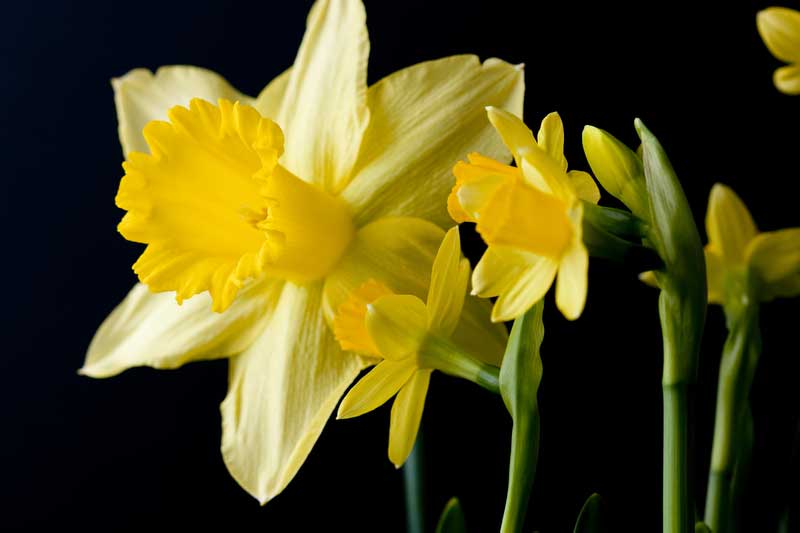 Daffodils also mean domestic bliss and friendship and they can be found in white, orange or yellow bunches. Another name for the daffodil is jonquil which comes from the Spanish word “jonquillo” which means rush and it is referring to the rush-like leaves on this flower’s stem. A few more snippets about the jonquil or the daffodil are that in the Victorian era it’s hidden message was “you are an angel,” it signifies desire for affection returned or sympathy, it is also known as Narcissus and it blooms from February to May. Originally, the daffodil was used to celebrate several holidays occurring in March like St. David’s Day and St. Patrick’s Day and then  the flower was also used for celebrating Mother’s day in May as well.

In honor of all the March birthdays out there, grab a hand full of their birth flower the daffodil and pick out one of the classic Claddagh birthstone designs and make this a birthday that they are sure to remember.