Autumn is almost here and with the introduction of a new season of fall comes a transitory period. The month of September marks the ending of summer and the beginning of fall. It is therefore not too surprising that the month of September and everything about it personifies this change starting with it’s birthstone.

Sapphire is the birthstone for this month. The sapphire belongs to the group of four precious gemstones with the other three being the diamond, the ruby and the emerald. They are one of the oldest stones known to man having been originally discovered in riverbeds. Throughout history, this blue stone has seen it’s value revered as a choice gem. It was selected as the appropriate jewel to be used as the badge for the pope because the sapphire was considered virtuous.

It was also believed that this stone helped in many other ways. People chose the sapphire for preserving chastity, discovering fraud, and protecting themselves from deadly plagues and diseases in the Middle Ages.

The color of the stone varies, although many of us are most familiar with the deep blue sapphire. Because sapphire is composed of the material corundum this makes it possible for many other colors of the stone to be possible. For instance, corundum can be pink, purple, green or even orange.

It is also said to have healing qualities. Those who believe in this aspect can expect that is will help with peace, meditation, creativity and pain management if they wear one. There have also been many famous examples of this stone throughout history from the “Blue Giant” to the “Star of India.” Seen here, these are many excellent examples of world famous sapphires shown and described in detail. 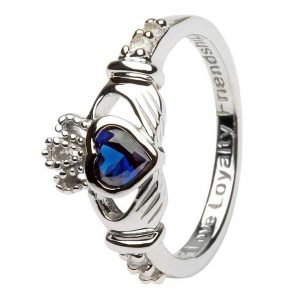 For your selection of an Irish piece, we have the September claddagh birthstone ring which is made of sterling silver and finished with a stone that encapsulates this remarkable birthstone. If you prefer, we also have a September claddagh birthstone pendant. It is also constructed of sterling silver and affixed with our very own form of the September sapphire. Both make wonderful birthday gifts and will be even better once you know a little history of the stone. 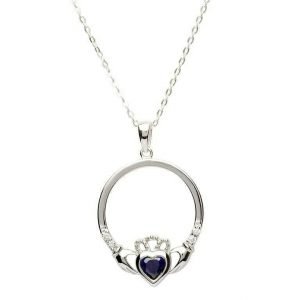 Adding the month of September’s flower cannot hurt. For this month it is the aster which usually blooms in pink, red, white and sometimes lilac or mauve. This flower represents wisdom, love and faith. The Greek tale of how this flower came to fruition is quite interesting.

Astraea, the goddess of innocence, went to live in heaven as Zeus covered the world in a flood in order to rid it of corruption. Two humans survived the flood of Zeus. Astraea wept for the two humans who survived and as her tears fell to the earth it is said that wherever her tears fell, asters grew.