Far from the impression of this title, the woman that this article is about did not become a Celtic ballerina while in Ireland.  Instead, she became a graceful and poised ballerina nearly 6,000 miles away from home. What she did was gained an education and an edge that was hard to come by and in doing so, she brought this insight back to Ireland so young girls could take advantage of what she had to travel so far to attain.

Her name is Monica Loughman and the path she took was not an easy one. When she was only fourteen, she left for Perm, Russia and while there she studied at the Perm Opera and Ballet Theatre.  In interviews, Monica tells numerous stories. Some show the obvious fear and apprehension she faced as a young girl on her own in a foreign country. It is said that when she arrived she had only a Cabbage Patch Doll and knew no Russian.

She was alone and at a fragile age. Being a Westerner was a hindrance for her.  She says she was teased and isolated. This is common behavior for young girls, however, imagine how much harder it is for that girl when she is all alone with no family or support system to guide her.

Here is a brief video of Monica dancing as an adult.

What Monica did is nothing short of inspiring. She took the taunts, embraced her outcast status and made herself stronger.  She fought to be an excellent dancer. She even says that there were nights that she ended up locked in the theater because she was there so late perfecting her moves.

Eventually, her determination paid off and she landed important roles in ballets. She was excelling and when she returned to Ireland a dream became apparent to her which was to offer a professional school of ballet centered in the Russian skills she had learned in Perm.

The goal was not an easy one. Soon, she faced the deaths of both her mother and her sister. And eventually, she was a single mother just trying to make ends meet. Perhaps, her life of independence prepared her for such a feat. Today, she says that her goal is to help young dancers achieve the things she already has. She truly wants to help younger ballerinas prepare to be great.

In fact, Monica says it best when she talks about her reasons for why she developed her school.

“My dancing career has gone right to the back because I’ve done my dancing. People have seen me shoot the leg up behind the ear. I would rather be doing this than be a jaded ballerina. I train other people to take my place. I tell them that they’ve got to want this because I’ve already done it. I’ve had enough applause to get me to the next life.”

The ideal gift for a young, Irish ballerina is this Silver, Pink, & Diamond Enamel Shoe Pendent. Made of sterling silver with rose enamel and trinity knots, these slippers look very close to ballet shoes. Tell your little dancer that you want her to be encouraged! 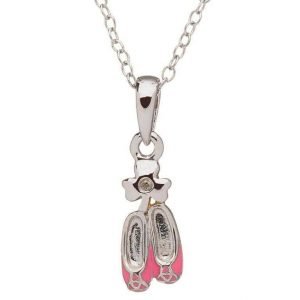