Most stories about a marriage that lasted less than a day involve Nevada, alcohol and embarrassment. The tragic love story of Proclamation signer Joseph Plunkett and Grace Grifford is entirely different. Their time on earth as a married couple was measured in hours, but their love eternal. 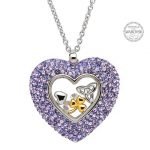 St. Valentine’s Day is a chance to express your gratitude for the love in your life, enjoy some romance and celebrate love. It’s a day for the love stories with happy endings, but is it not the tragic stories that make us realize how precious those happy endings are? One of the most heartbreaking images of the 1916 Easter Uprising is Joseph Plunkett marrying his beloved Grace Gifford in Kilmainham Gaol’s chapel just seven hours before his execution.

Joseph Mary Plunkett was born into an affluent Catholic family in Dublin in 1887, but his childhood was marred by illness. He suffered tuberculosis as a child, and it caused lasting health problems. As a young man, he traveled to sunnier climates, including Italy, Malta and Algeria, to improve his health.  Plunkett was the director of military operations for the Uprising, as well as an accomplished poet. 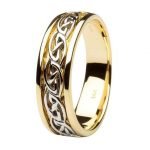 Grace Gifford grew up in a mixed faith family – her father was Catholic and her mother Protestant – in Rathmines on the south side of Dublin. She was an artist, illustrator and cartoonist. Her work appeared in a variety of Irish publications including The Irish Review, which Plunkett edited. Plunkett’s friend and fellow revolutionary Thomas MacDonagh, another signer of the Proclamation, married Grace’s sister Muriel. The two couples had planned on a double wedding, but Plunkett’s health prevented that.

Because of his tuberculosis, Plunkett needed surgery shortly before Easter. He had to delay his wedding, and he left the hospital still bandaged to participate in the Uprising. He reported to the General Post Office, and his young aide de camp impressed everyone with his devotion to helping Plunkett. That young man was also learning what he needed to carry Plunkett’s torch in the future fight for freedom. He was Michael Collins.

Joseph and Grace planned to wed eventually, but he was arrested along with the other rebels and jailed in Kilmainham. When Joseph’s death sentence was known, they manged to arrange for their wedding to be performed by the prison chaplain. Grace was brought to Kilmainham in the evening, and the couple had no time alone together at all. They were wed with two British soliders as witnesses, and had one last visit together after the ceremony. A prison guard stood nearby with his watch and announced when their ten minutes together were over.  Joseph was executed at dawn.

Grace supported the struggle for Irish independence all along, as her cartoons show. After Joseph’s death, she joined Sinn Fein and resumed her career as an illustrator. She eventually served time in Kilmainham Gaol herself for her political activities, and her former cell can now be seen by visitors featuring a recreation of art she painted on the walls while there. She never married again, and died alone in 1955.