Love, loyalty, friendship AND warding off the evil eye | ShanOre
Skip to content

A birthstone is different from a gemstone, right?

George Frederick Kunz, author of The Curious Lore of Precious Stones, writes eloquently about this:

“There can be no doubt that the owner of a ring or an ornament set with a natal stone is impressed with the idea of possessing something more intimately associated with his or her personality than any other stone, however beautiful or costly it may be. If it be objected that this is nothing but imagination due to sentiment, we must bear in mind that imagination is one of the most potent factors in our life; indeed, the great Napoleon is quoted as saying that it ruled the world.” 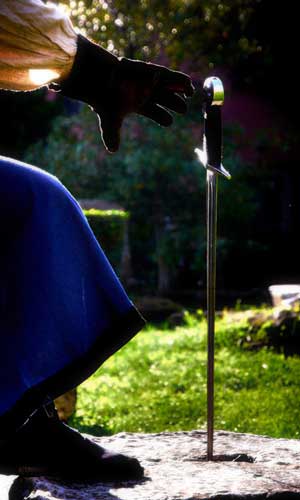 On a level reminiscent of the Arthurian legend of The Sword in the Stone, a birthstone lays claim to something ethereal, something ancient, something that feels magical because we’re just intuiting what science will later explain away, surely.

When adorned with their birthstone, the wearer enjoys access to something that cannot be achieved without. Only one person can pull the sword from the stone, much like if you’re born in September, only you and the other September-bornes can truly wear a sapphire or other gem of equal significance.

For each month, a stone—says who?

This idea of months and stones feels suspiciously pagan. History reveals that before there were birthstones, there were zodiac or zodiacal stones, divined by ancient astrologers as having geological resonance with the celestial powers up above.

At some point, a first-century Jewish historian, St. Jerome, the Polish, and then, the Americans got involved. Thus, is the origin story of birthstones.

But what of the special powers?

One site speaks of sapphires as endowing its bearer with things that read more like what you’d come across in an X-Men comic book:

“The sapphire was said to represent the purity of the soul. Before and during the Middle Ages, it was worn by priests as protection from impure thoughts and temptations of the flesh. Medieval kings of Europe valued these stones for rings and brooches, believing that it protected them from harm and envy. Warriors presented their young wives with sapphire necklaces so they would remain faithful. It was believed that the stone’s color would darken if worn by an adulterer or adulteress, or by an unworthy person.

Sapphires were once believed to be protection against snakes. It was said that if poisonous reptiles and spiders were placed in a jar containing the stone, the creatures would immediately die. The French of the 13th century believed that sapphire transformed stupidity to wisdom, and irritability to good temper.”

A Vedic site explains in plainer terms, as if one were explaining why dark colors keep you warmer than lighter colors, the peculiar qualities of gemstones as they relate to the heavens:

“Gemstones have long associations with astrology because as crystals they retain the astral influences of the sun, moon, and planets longer than any other known substance. Because gemstones have the ability to absorb, reflect and radiate different frequencies of light, they can be used to correct or amplify planetary influences. “

Incidentally, here’s a TED Talk about Vedic math that might just change your life.

Along with mention that the sapphire is the second hardest stone (diamonds being first), another site shares that a sapphire can be used “as protection from the evil eye,” or to “open yourself up to receive heavenly messages,” and can even “help you find your hidden potential.”

All of this gets even more interesting when thinking about the synthesia in regards to the powers attributed to not just a sapphire but other birthstones as well.

What’s undeniable is that birthstones are special. When placed in the heart of a Claddagh, they become even more so. 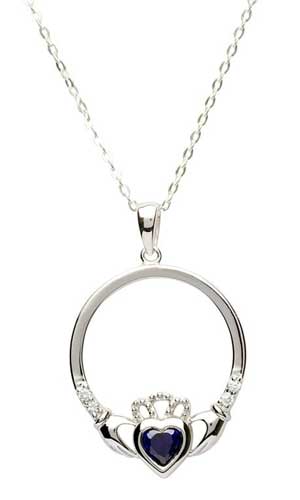 The Claddagh Birthstone Pendant, with a heart, filled out with that dazzling September blue, might not help you with the evil eyes as you’re sure to garner some jealousy. But even more so will there be smiles and looks of delight, especially if given as a gift!

Have any thoughts on birthstones? Feel free to get wordy in the comment section. And don’t hesitate to contact us with any questions.

One thought on “Love, loyalty, friendship AND warding off the evil eye”