Do you really know what a leprechaun is? Have you ever seen one? The first time most of us ever heard of leprechauns were most likely when we were children and we were told about rainbows and how legend said that at the end of a rainbow there was a pot of gold. Some of us may have even been told that there was a being, a small one, dressed in a little green suit, with an Irish accent, who would guard this treasure. This is what most of us came to understand as leprechauns.

The existence of leprechauns are just a mysterious tale as things like the Loch Ness Monster, Bigfoot, and other well talked about phenomenon. Some claim to firmly believe in their being while others chose to think they are just a myth. It is not a surprise that Leprechauns are born of Irish folklore which makes their continuation even more perplexing. If you chose to be a follower of mysticism and have more of an open mind than chances are you might believe in such a creature. If you tend to think things like this could never exist outside of a normal human being, than you would not believe in leprechauns. So, their acceptance somewhat lies in what people chose to subscribe to. 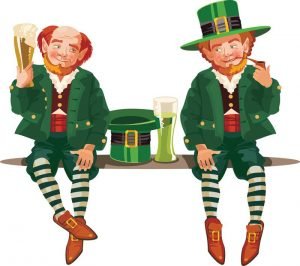 They are the cousin of the clurichain which is an Irish fairy. The clurichain does not make the best of accompaniments in Irish folklore. Their attributes consisted of staying up late and drinking thus leading to havoc and mischief. They are also said to have a bad temper and to be unfriendly. It does not help the leprechaun to have this in a cousin, however, their temperament has always been seen as quite the contrary to that of the clurichain.

First off the leprechaun loves to dance. They are tiny creatures, that are small enough to fit on the shoulders of most people. Leprechauns are very excited muscians as well. They play different arrays of musical instruments from fiddles, whistles or harps. When they get together they Ceili dance and play and sing which can lead to much activity.

One of the most interesting attributes of the leprechaun is the granting of three wishes that was given to them. Most of us have heard of this and seen this depicted in countless stories and films. It is not exactly clear how they were to use these wishes whether to use for themselves or to escape capture from a human or a predator or if they give this as a form of gratitude to someone who helps them. What is known was that the three wishes was given to the leprechaun by the fairies in order to protect their pot of gold. However, they choose to use it can depend. If they eventually chose to give the gold to someone in need they may very well do so. We may never know. Thus is the legend of leprechauns.

They are mysterious and a bit mischievous. However, they also can turn out to be a bit surprising. On a whole it is still a debate on whether people believe in their survival. People still seek them out today. Whatever it is that you believe one thing can be clear, that whether they are real or not the legend and message they send out is one of pleasantry and optimism. How could a band of tiny musically inclined creatures be such a bad thing?