What began as a day to celebrate one of Ireland’s patron saints is now a global celebration of all things Irish for people of all ages.  Of course, the people who really know best how to enjoy a holiday are the little ones.  While many cities and towns around the world hold parades, which are enjoyed by all ages, much of the festivities happen in pubs – and children can’t participate.  But with a little imagination, and a little help from some other wee people, you can make St. Patrick’s Day unforgettably fun for your little ones. 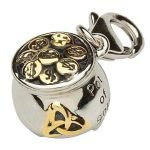 We all know we’re supposed to wear green to avoid being pinched in many parts of the world, but why stop at just a green shirt for the children?  With a little face paint and a green hat, your little one can be one of the little people – yes, a leprechaun.  Toddlers and preschoolers are the only people as endlessly mischievous as leprechauns, so why not embrace it?  Older kids will enjoy some creative leprechaun fun too.  A paper plate, some green construction paper to make a hat, some red or orange yarn for a beard and some crayons and voila, your little one can make a leprechaun mask. Why not hide a wee pot of gold coins – chocolate ones! – for each child to find on St. Patrick’s Day?

The lore of the leprechaun actually dates back to medieval times.  Three leprechauns feature in a tale about King Fergus of Ulster.  He falls asleep at the sea side and awakens as the trio of wee folks is trying to drag him into the sea.  He turns the tables and captures them, which prompts them to offer to grant three wishes in exchange for their freedom.  The wee folk have been causing all sorts of mayhem ever since with their three wishes and pots of gold at the end of the rainbow.  Anyone who has visited Ireland and driven around in a rental car can tell you how much they enjoy turning road signs and sending people in the wrong direction – without so much as a pot of gold at the end of the road. 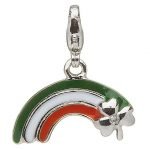 Another thing you might notice driving around Ireland is faerie forts or raths.  Looking across a field, you might notice a raised ring in the ground, large enough to the outline of the remains of an Iron Age dwelling, which also makes a great hiding spot for a wee pot of gold.  But don’t dare go looking.  Dreadful things tend to happen to people who disturb the faerie forts.  Those leprechauns are touchy fellows with short fuses.  (That’s another reason toddlers relate to them so much.)

Once you introduce your children to these mischief makers, however, be warned that they might not simply disappear on March 18th.  There is a risk of continuing shenanigans, and you will notice that leprechauns can get up to the same sort of things as the very busy and ever popular Not Me who normally gets blamed for spills and other sorts of household destruction.