On the west coast in Spiddal, there is an event called Spiddal Poetry held in early March of this year. This seems to be a festival soaked in Irish culture, dancing and music with a vast line up of local musicians and artists set to perform. The information for this event is on their webpage Spiddal Poetry, which is written in Irish. It is very nice to see how traditional these folks are remaining down to the last detail. However, there is an option to translate the page for those who don’t speak the native language.

If you happen to have a birthday in March or know of someone who does, then nothing could be sweeter than getting yourself or your friend a March Celtic birthstone pendant. The stone for this elegant piece is the pretty light-blue stone of aquamarine. Around the stone are two trinity knots made from sterling silver. This piece will highlight your birthstone which is shaped like a heart and the trinity knots will show your devotion to Ireland. 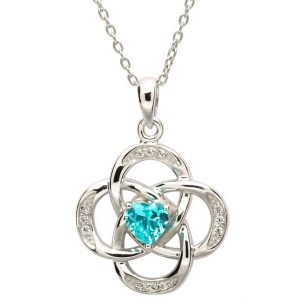 There is an Irish film festival in March called the Fresh Film Festival from March 23rd through the 28th. This great event in Limerick City is nearly two decades old. It started from a competition for secondary students, but gradually it has evolved into much more than that. Currently, the festival prepares to show several different films made by young talent anywhere between the ages of 7 and 18. The entries vary and when making plans, you can pick the films that most appeal to your tastes.

This year Fresh Film is showing a large screening of the Commitments which was a huge hit from the 1990’s. Even the man who wrote the book, Roddy Doyle, will be present to hold a workshop in order to give advice for aspiring young talent. Then Fresh Film will give out awards to the best films that were entered. Even if you don’t makes films, it seems like this is a perfect opportunity to enjoy the vibrant work of upcoming artists. And even better is that you can bring along your friends!

As I mentioned earlier, March is a great month to be in Ireland. There are so many amazing activities planned, that it will be near impossible not to be in great spirits!