Civil wars have been hallmark in many countries. Ireland is no stranger to war. If we can take anything from them, then perhaps it can be some of the most heart-tugging and memorable love stories. This again, is not unique to the Republic of Ireland. During times of civil strife, many people become divided by their duty, beliefs or distance and this makes keeping, starting or fulfilling a relationship near impossible.

For these two people, Joseph Plunkett and Grace Gifford, the independence of Ireland in the early 20th century was both beautiful and tragic for their union. Joseph was a poet and very involved in the Sinn Fein. He became a very key and instrumental person in one of the biggest strife’s in Irish history.

Grace was quite talented in her own right. She was a naturally inclined cartoonist from an early age. Grace received training at special art schools and had studied under influential people. She was using her skills as an artist when she met Joseph. Although she had been raised a Protestant and Joseph was a Catholic, this difference was one that proved to encourage a bond between the two.

This would have been quite nice had their wedding taken place as scheduled: This 14k white gold solitaire princess cut ring with the line of the trinity knots around the band was an ideal symbol for this everlasting relationship. 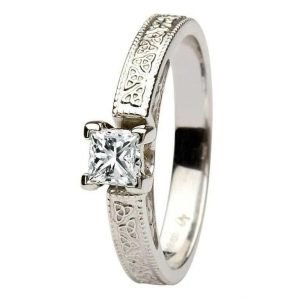 Grace’s inquisitive nature into Joseph’s religious background led to the two becoming intimately acquainted and eventually Joseph proposed to Grace. Grace’s sister, Muriel, had become engaged to another famous revolutionary of the time, Thomas MacDonough, and they had all planned to be wed in a double wedding ceremony around Easter time.

However, fate stepped in and changed their course drastically. With Joseph’s position in the ranks, he and several top leaders decided to revolt in the infamous Easter Rising. He knew the situation was precarious and if unsuccessful that he would be killed, however, he went forward with the plan. The following was a letter that he wrote to Grace before that event:

This is just a little note to say I love you
and to tell you I did everything I could to
arrange for us to meet and get married
but that it was impossible. Except for
that I have no regrets. We will meet soon.
My other other actions have been as right
as I could see and make them and I cannot
wish them undone. You at any rate will not
misjudge them.

Give my love to my people and my friends.
Darling, darling child I wish we were together.
Love me always as I love you. For the rest all
you do will please me. I told a few people that
I wish you to have everything that belongs to me.

This is my last wish so please do see to it.
Love, Joe

As anyone who does not know, the uprising failed and all of the main catalysts responsible for the rising were sentenced to death via court martial. What is bittersweet is that somehow Grace was able to get to Thomas before his execution with a ring and they were married while he was awaiting his death.

For him, this Celtic embossed pressure set diamond wedding ring would make a perfect set with the ladies ring above. 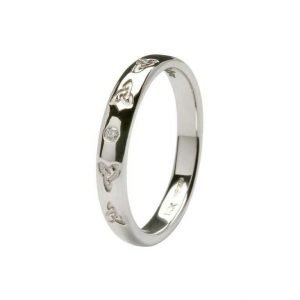 They spent just ten minutes together alone as soldiers watched on after the ceremony and then sadly Joseph was killed. Grace did devote a large part of her life trying to follow in her late husband’s footsteps, although she was met with much difficulty. Her artistic skills carried her throughout life and she did what she could. Grace never did remarry, but the legacy left behind of the mutual love of Grace and Joseph is one that is nothing short of touching.